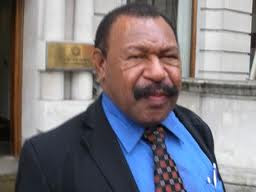 The National reports allegations of institutional corruption and blatant abuse of public money have been levelled against Morobe Governor Luther Wenge by his provincial treasurer, Andrew Namuesh.
Namuesh provided documents to substantiate his claims against Wenge, amounting to more than K6 million. One of the major issues was the sale of the former government store to Steamships Trading for K5.9 million. The sale was auctioned by Arthur Strachan Ltd of Lae for a 2.5% commission of the gross offer.The transfer of titles and consultation of sale were conducted by Steeles Lawyers.
Namuesh claimed that the provincial executive council, under Wenge, had invested K4 million of the proceeds in an interest bearing deposit at the Westpac Lae branch. Against that deposit, the provincial government would take out a loan to fund the Lutheran University of Papua New Guinea. The university’s establishment committee was chaired by the principal of Steeles Lawyers, Rimbink Pato.
The decisions were made in the PEC (Sam Sewe) of June 5, 2006, and given to provincial administrator Manasupe Zurenuoc to execute. All other projects were to be placed on hold until given “proper allocation for loan repayment in the 2007 appropriation”.
Other unbudgeted requests that were funded included K1 million for Poahom airstrip, less than 20 minutes drive from Lae in the Nawaeb district; establishment of K450,000 for a joint venture with a Frederic Griffith; and, recently, K200,000 for Black Cat Trail Ltd. However, Wenge last night denied the claims, saying all financial dealings of the PEC, himself and the provincial administration were made in accordance with the rules and regulations covering public monies.
“If the treasurer sees that there have been illegal or irregular proceedings regarding the Morobe provincial budget, he should go to the Ombudsman Commission or the police,” he said. “Unless he can establish that I am trying to steal, or some businesses are going to give me some money back, where is my misappropriation? “We totally deny any illegality or impropriety,” Wenge said.
“The PEC has the power under the same Finance Management Act he is talking about to change scopes, even though projects or emergencies have not been budgeted for,” he stressed. However, Namuesh had argued that “the decision made by the PEC to award K200,000 to the Black Cat company did not comply with the rules and I, for one, take their (PEC) decision as institutional corruption, meaning decision makers are using appointed recognised bodies as rubber stamps to get rich overnight using the public purse”.
He said the claim was not budgeted for in this year’s budget, there was no certificate of incorporation from the registrar of companies for Black Cat Trail Ltd. Namuesh yesterday said since he assumed the treasurer’s job in 2005, he had, on various occasions, pointed out to Wenge the need to be cautious with public monies so that spending on certain PEC-approved projects were in accordance with procedures and rules under the Public Finance (Management) Act.
Namuesh’s statement followed an attack on him last Thursday at the Morobe provincial headquarters car park by chairman of the Nakuwi Kuembu Winima landowner company, Rex Mauri, over a payment. The provincial treasurer said he had also written to Wenge expressing dissatisfaction over several financial assistance claims as there were no procedures and criteria set in place to assess and approve them in accordance with procurement procedures established under the Public Finance (Management) Act.
He cited some claims as not part of service delivery, saying their nature were more of personal requests which could be entertained by banks and other financial lending institutions. “The Government Appropriation Act is very clear regarding service delivery-related expenditure,” he added.
“While I appreciate the powers bestowed on the PEC to approve or reject, through submission on finance matters, as a second authority after the provincial assembly (Tutumang), it still lacks proper procedures and guidelines to properly coordinate the submissions from the core functions of the provincial government and the Morobe provincial administration,” Namuesh said. “Although treasury does not have the power to question PEC decisions, we are duty bound to ensure checks and balances are in place in regard to good governance, transparency and accountability for the use of public money,” the treasurer said.
He said it had become PEC custom to use section 6 of the Provincial Appropriation Act (change of scope) to transfer funds from one expenditure to another and, according to him, that section should only apply to projects under the development budget. However, Wenge fought back: “The PEC has the power, under the same Finance Management Act he is talking about, to change scopes even though projects or emergencies have not been budgeted for.
“The PEC has the power to decide on projects and, as long as I am satisfied that the community at large is going to benefit, it goes to the provincial administrator for vetting and then the treasurer for processing.
“Why has he kept quiet about these things and suddenly is going out to the media when, clearly, there has not been any misuse of funds?” the governor asked.
Andrew Namuesh Black Cat Trail Ltd institutional corruption Luther Wenge Lutheren University of Papua New Guinea Manasupe Zurenuoc Morobe Governor PEC public monies Steeles Lawyers