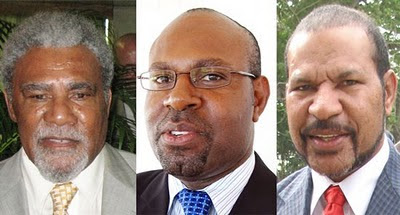 It has been reported in today’s National newspaper that a number of Opposition MPs including firebrand opposition spokesman on Finance and Treasury Imbongu MP, Mr Francis Awesa, his son in law and Mendi MP, Mr. Isaac Joseph along with John Garia (Chimbu), Ferau Orimyo (Henganofi) and Steven Kama (South Bougainville) deserted to Mr. Agiru’s URP (United Resources Party). While media reports are sketchy about the confrontation with the current party leader and Hagen MP Mr. William Duma, a lot of questions are now being thrown to the Prime Minister if he is aware of this new move.
Is this a ploy to shake the current partnership and test the possibility of wrestling the Deputy Prime Minister post away from NA? Is this a scheme setup by the opposition as a Trojan horse to snatch the numbers in government and breaking the bond with the current coalition? Many questions need asking, but at the same time, the quality of opposition is legendary with the brain trust at helm right now, never in the history of PNG Politics have we seen a vast amount of experience and quality in the opposition, Mekere, Philemon, Chan and Temu are men who many respect. The five that crossed over had quality in them, Awesa who was a known no-nonsense MPs who questioned without fear, but all first term MPs really, they got nothing to show for to their voters.
So it’s like 2010 now, next year will be 2011 and then another year and a half to Elections 2012. The quality of candidates that will run against the MPs who have now joined URP MPs must be a concern to these MPs concerned. I know the Southern Highlands MPs so I will speak to what I know, Isaac Joseph and Francis Awesa can claim to do a little for doing a lot for their electorate but in reality a physical visit from Kaupena to Mendi on the Okuk Highway will tell you a different tale. Mendi and Imbongu Electorate have been in a state of decline since the late 1980s and the early 1990s.
I don’t travel that far and wide to know what Chimbu is like because most of the time the Highlands Highway is blocked so I can’t speak for John Garia or Ferau Orimyo who is the MP for Henganofi. Henganofi don’t know if this electorate exists in PNG, I find it hard to remember MPs that go into Parliament and fall into 5 years of coma. I heard about Henganofi when John Giheno was Defence Minister and acting Prime Minister when Chan was sidelined and when Viviso Seravo was mentioned a lot when he and Jimmy Maladina along with Peter O’Neil (Finance and Treasury Minister) stole millions of saving owned by hard working Papua New Guineans. Steven Kama was a great entrepreneur, his South Bougainville electorate I simply can’t and will not know what it’s like. I know it is not even up to standard, declined since the civil war broke out. See it’s like there are a lot of electorates that are dead and dying, there is no economic vehicle to drive these districts forward.
So we might know some reasons behind the move, it could be a frustrations, failure in attempting to overthrow Somare, or it could be related to issues that keep piling up back in their electorates or it could simply be related to getting their share of the EDF that O'Neil blocks from releasing which they should have rightfully. Their security as an MP is questionable since they just make up numbers. By joining the government of the day they get their share of goodies to remain a voting number.
Isaac Joseph was always with the NA, he would have voted for NA anyway because he is Anderson Agiru's little apprentice. He was handed the SHP Deputy Governor and from that move, the Hela MPs in the Southern Highlands Provincial Executive Council have not forgiven him for that. Joseph has been a stalwart of a lot of programs that Agiru has started more or less like the rubber stamp. In the past two years, Southern Highlands has been on a decline. When he was acting Governor he awarded alot of contracts to companies that were did not even have the capacity to handle projects.
His own family ties with Francis Awesa is now questionable since they are now been branded by Agiru, and as a Southern Highlander its in the making of Agiru telling Awesa to jump ships so he can reward him with what is left in Mendi. Southern Highlanders should wake up and look beyond the National Politics and look at what the issues in Mendi will be like when Agiru returns to run for Hela and Awesa and son in-law Isaac control the coffers of the Southern Highlands people.
Anderson Agiru Ferau Orimyo francis awesa Isaac Joseph Towang John Garia NATIONAL ALLIANCE Southern Highlands Steven Kama URP