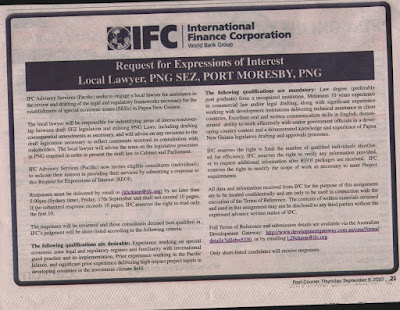 PNGEXPOSED We alerted readers several days ago to the malevolent plans of the World Bank to push for the establishment of sweat shop factories in Papua New Guinea [read more]. Now the Bank has gone public with its intentions, advertising in the media for a lawyer to draft the legislation that will allow the establishment of Special Economic Zones.
Apparently oblivious to the blatant Colonial implications and completely contemptuous of Papua New Guinea’s own democratic procedures, the World Bank is advertising for a lawyer to draft legislation for Papua New Guinea before Parliament has even debated whether such legislation is desirable or needed.

Normal process would dictate that should Parliament decide Special Economic Zones are a good idea then it would be the job of Papua New Guinea’s public service to draft a policy and subsequent legislation.

But the World Bank clearly has no time for such niceties and is happy to run a bulldozer through notions of independence and National sovereignty in its pursuit of the economic interests of the transnational corporations.

Those corporations, of course, want duty free access to PNG resources and to process and add value to our raw materials without bothering with domestic niceties like minimum wages and health and safety laws – and they certainly don’t want to be bothered with paying any taxes.