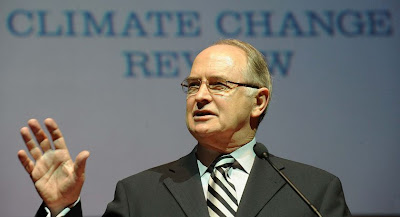 CLIMATE-change expert Ross Garnaut is linked with two companies accused of using a controversial method of releasing mine waste into rivers and the ocean in Papua New Guinea.
Professor Garnaut conducted the Rudd government's 2008 climate-change review which urged action on the issue, including an emissions trading scheme.

But the economist also chairs Lihir Gold, a mining company which has merged with Newcrest Gold, and he is a director of OK Tedi Mining Limited.

Lihir was the subject of a takeover bid by Newcrest Mining and Prof Garnaut will relinquish his $US300,000 ($A327,225) role as a result of the merger.

The Lihir group is set to produce one million ounces of gold a year on Lihir Island, 900km north of Port Moresby.

Tiffany Nonggorr, a lawyer representing indigenous PNG landowners, says the practice by Lihir of dumping billions of tonnes of mine waste and metalliferous tailings, including cyanide and heavy metals, is a great concern.

The practice is banned in China, Canada and the US.

"This sort of technology is frontier technology," Ms Nonggorr told ABC Television tonight.
OK Tedi's operation is already having a far-reaching impact, she said, quoting "a couple of studies" by the CSIRO.

"They quite clearly show that this deep-sea tailings placement has severely impacted the ecology of the area," Ms Nonggorr said.

The river where the tailings are dumped has been left a "moonscape" and she estimated that the copper levels 800km from the mine in the river's silt are 3000 times the safe level.

"That river is going to be affected for 300 years or more," she said.

The Scottish Association of marine science has completed a study into the impact of the Lihir tailings but it has been kept secret by the PNG government.

The researchers said such dumps might need to be managed for decades or longer.

Australian Institute of Marine Science researcher Greg Brunskill said the waste disposal into the coral triangle which runs from the Solomons to eastern Indonesia was "probably not a good thing".

"The diversity of coral and fish and other kinds of marine animals is at a near global maximum," Dr Brunskill told ABC Television.

"It endangers a very large tuna fishery ... it endangers food sources and cultural use of the sea by the local villagers."