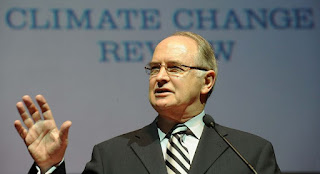 Climate change expert Ross Garnaut has defended the decision of mining companieswith which he has been involved to use a controversial method of releasing mining waste into rivers and the ocean in Papua New Guinea.

Professor Garnaut, who conducted the Rudd government's 2008 climate-change review, was the chairman of Lihir Gold, a mining company taken over by Newcrest Gold last month. He is also a director of OK Tedi Mining Limited, another company that operates in PNG. Last week the ABC's 7.30 Report aired a report about Lihir and OK Tedi's practice of using deep sea tailings placement (DSTP) at two separate mines.

The Lihir project, under Newcrest, is set to produce 1 million ounces of gold a year on Lihir Island, 900 kilometres north of Port Moresby.
OK Tedi extracts copper, gold and silver from its remote Star Mountains operation in PNG's Western Province.

According to the ABC report, OK Tedi discharges 56 million tonnes of metalliferous waste into local river systems each year.
The practice is banned in Canada and the US and indigenous landowners were concerned with the method being employed at the mines.

Professor Garnaut said the report comprehensively misrepresented his work. He said that, through the integration of false and misleading statements by several people and misleading footage, the ABC had built up an "elaborate, negative and false impression of the activities" of the Lihir and OK Tedi operations.

"The piece amounts to a comprehensive attack on my professional and personal integrity," he told reporters at a press conference in Canberra.

Professor Garnaut said he had approached 7.30 Report anchor Kerry O'Brien about what he considered were "errors and distortions in the piece" and was offered an interview with the reporting journalist.

"I declined, on the grounds that it was unreasonable to expect that the journalist who had played an important role in the presentation of egregious errors and distortions would straightforwardly acknowledge errors," he said.

Instead he suggested a statement on the program that acknowledged the piece had been erroneous and misleading, accompanied by an apology.

Disposal of waste and tailings inevitably involved some disruption of the natural environment, he said.

On Lihir, Professor Garnaut said, the decision to use DSTP rather than land-based tailings disposal was taken after careful consideration of the alternatives.

He said the local people of the Lihir group of islands were also consulted before a decision was made, and involved careful consideration that agricultural land was scarce, valuable and highly prized.

"The people of Lihir were very clear that the careful placement at great depth of this material was strongly favoured by them," Professor Garnaut said.

He said monitoring in the deep ocean had shown there had been some effect of DSTP on zooplankton but it did not smother all growth of the tiny invertebrates.

"There is no effect on the food chains and the ecology of the seas affecting any fish used by humans.

"There is no effect on the natural environment."

Professor Garnaut said the dilemmas at OK Tedi had been more acute.

He had taken up his position as a director at the request of BHP Billiton to join and chair the board on the PNG Sustainable Development Program in 2002 "because of the opportunity that it provided to make a large and different contribution to sustainable development in PNG", he said.

"Sustainable development is hard anywhere. It is especially hard in PNG.

But the achievements under the program were considerable, he said.

Legal action has been suggested to Professor Garnaut but he said he was simply seeking to correct the record at this stage.

"At this stage, right at this moment, my primary purpose is to correct the gross distortion in the program," he said.

"I don't think there's any doubt I've been defamed, that's a different question as to whether action will be taken about it."