QUESTIONS ABOUT THE CSTB CHAIRMAN, IS HE CORRUPT? 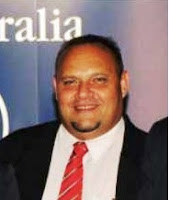 It seems that no government department and agency is without Corruption. CSTB is one state institution that has corruption and malpractise firmly embedded.

Take the care of CSTB Chairman Brian Kimmins. Mr. Kimmins was a no good water driller in Lae before in become land transport board chairman. He was running his sister's drilling company in Lae for many years then migrated his family to Brisbane, Australia.

As the Land Transport Board Chairman, he absolutely did nothing for the agency. Through political cronisim, he was elated to the post of CSTB.


Appointed by the then Bart P. Lae Mp (some 7 years ago) and found his way to survive politicly. He collects his fees/cuts by lining up contracts. The latest is the awarding of the police house constructions with inflated prices to look after the political head, departmental heads and the very important man the Tenders Board Chairman - BK.

He travells every weekends to Brisbane and back, owns two houses in Brisbane, this is one of the corrupt officials that can be lined up with the politicians who milks this country dry.

Over the last years, he had been able to live a high lifestyle from driving a beat-up toyota double cab hilux in Lae to some of the high range motor vehicles like a top of the range Nissan Patrol fully kitted. He has also accumulated travel mileage without any real benefit to the CSTB.

He has been able to frequently moved his children from Brisbane to Port Moresby at will. He has accumulated a boat that is now moored at RYPC and live his high quality accommodation in downtown pom/koki. He is a frequent over night guest at Crowne Plaza and Ela Beach Hotel. A regular drinker and womaniser at Ozzie's Bar always escorted by a large entourage.

It is also possible that Brian Kimmins is working with is brother Keith Kimmins to get rich overnight using CSTB. Keith Kimmins has also gotten rich overnight with a boat at RYPC, a house in Sydney, Australia and mega place on Yule Island. Keith like his brother Brian is a truckie from Lae who has quite possibly hit the lottery through this brother at CSTB.

He lacks the management and leadership skills that CSTB needs to improve its governance processes and handling of contracts transparently. At the last, PAC hearing on CSTB, his answers were swallow and did not have substance.

It is also time to check the migration status as either one does not hold a PNG Passport.