"A bitter and disillusioned nation" Somare 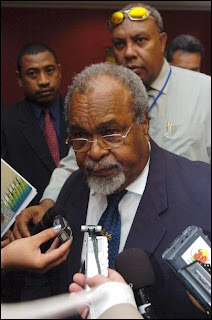 Papua New Guinea’s Prime Minister has gone on the record to complain about criticism of him and his family (see the Radio NZ report below).
“People are bitter. PNG has lost its sense of decency and it is a poison that could destroy the country” says Michael Somare.
But his attempts to somehow paint himself as the victim of outside forces betray the fact that he, more than anyone else, is responsible for this sorry state of affairs.
Michael Somare has been Prime Minister for the last eight years. As well as ignoring the corruption of his fellow Ministers and senior bureaucrats, he has tried to place himself and his family above the law by fighting Leadership referrals through the courts and ignoring inquiry findings. Somare and his family have enriched themsleves at the expense of ordinary Papua New Guineans and show no compassion – his K130 million private PMV is only the most obvious example.
Somare is the one that has treated Parliament with complete contempt and to he has been the one who has signed the deals that allow resource companies unprecedented tax breaks and other benefits and allowed them to walk all over the rights of ordinary people.
Somare it seems just can’t see that people are bitter because they see how he and his family behave and they are sick and fed up with the hypocrisy.
Somare should think himself lucky it is only jars of bettle juice spit that are being thrown in his direction!

The prime minister of Papua New Guinea has hit back at ongoing allegations about him and his family. In a statement to parliament Sir Michael Somare says no other family in the country’s short history has had to endure such venom coming from the opposition, the media and other critics. Sir Michael says his family has never taken anything from the country that didn’t belong to it.


“Sir Michael has faced staunch criticism surrounding the clandestine flight from PNG of the former Solomon Islands attorney general, Julian Moti, allegations over a failed attempt to shift PNG’s allegiance to Taiwan from China, and is offside with the Ombudsman Commission.

There are also claims that he and his wife kidnapped and beat up a prominent NGO leader. Sir Michael rejects any wrongdoing but says his family is subjected to unfounded claims and allegations on a daily basis.

He says corruption now creeps too easily into the vocabulary in PNG. He says people in PNG are bitter and in the speech spoke of bottles containing betelnut spittle being thrown at his car. Sir Michael says the country has lost its sense of decency and it’s a poison which could destroy it.”