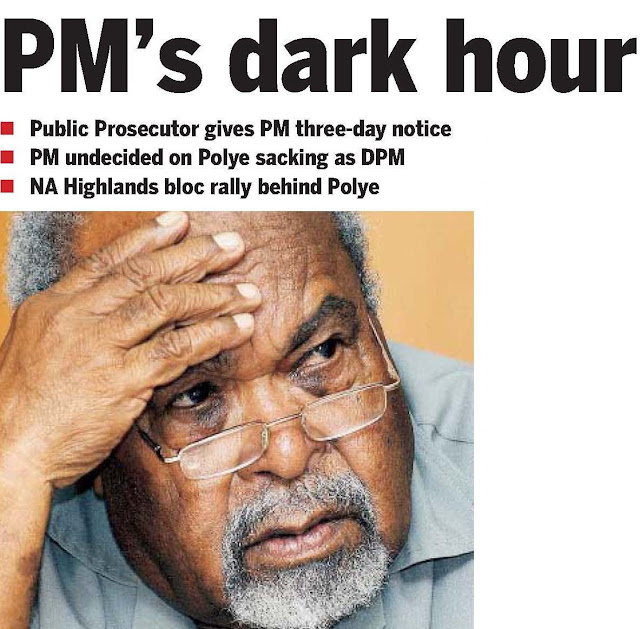 We were inundated with telephone calls from our readers all day yesterday for news on the latest political developments in Waigani from our readers throughout the country. All we did was to inform them that the updates were still coming in and by the end of the day; we will have something solid for them.
By the end of the day, we learnt that the Highlands Bloc of the National Alliance Party was meeting with the Prime Minister Sir Michael Somare, which culminated in a petition to the Grand Chief to rescind his decision to replace Don Pomb Polye with Sam Abal as the Deputy Prime Minister.

Abal, the son of one of the Highlands region most respect Parliamentarians in the colonial era, was not present at this meeting, we were told.
The Prime Minister is yet to respond to the petition, or if he did late last night after we went on to print it, we are not aware so it is safe to assume that Mr Abal, the Foreign Affairs, Trade and Immigration Minister is the new Deputy Prime Minister.

Questions are being asked as to why Sir Michael is making such a major reshuffle in his cabinet, knowing very well the consequences, one of which is the disintegration of the National Alliance party which he has founded and groomed to become what it is now, a national institution.
The answer, we are of the view is, the National Alliance Party. The reshuffle has everything to do with the NA Party and, if we may say so, its leadership into the future.

The reshuffle comes six days after we broke a story, regarding the Supreme Court ruling on an appeal lodged by Sir Michael over his referral by the Ombudsman Commission over misconduct in office charges.
Today, as it turned out, the Grand Chief is going through one of his darkest days in his long and distinguished political career.

As you will have read the front page story today, the Chief Justice Sir Salamo Injia is likely to be asked to appoint a Leadership Tribunal to deal with the misconduct charges and this means, Sir Michael will automatically step down as PM if that happens.

It is no secret that Sir Michael has been grooming his son, Arthur Somare, to take over the leadership of NA, when he leaves politics, and in his own words, at the end of this term of Parliament.
The NA leadership, it is widely expected, will be challenged by the deputy party leaders from the four regions. In Mamose, former finance and treasury minister Patrick Pruaitch was a contender but he is now out of the picture. Another MP that was lurking in the back was Belden Namah but he too is now out of the picture. That leaves Arthur Somare as the one from that part of the country.

In the Southern region, Sir Puka Temu was the obvious choice but when he moved to the Opposition, he too removed himself from that race. That leaves Paul Tiensten from Islands and Polye from the Highlands and between the two, the MP for Kandep is the biggest threat to Arthur Somare assuming the leadership of the party. Polye heads the biggest number in the NA Party; he is charismatic and has popular appeal in the highlands.

The Grand Chief has been in politics for over 40 years. A wily and clever old man, he is throwing caution to the wind, to ensure that the Somare name lives on and at the head of PNG’s biggest political party. And how does he do that? Give Polye’s job to Abal and watch them fight it out. Yes, the old divide and rule tactic.
However, the Highlands NA MPs are not fooled this time. The ball is now in Mr Abal’s court, that is to accept the offer by the PM or not. And the Highlands is watching.
Don Polye Leadership Tribunal Michael Somare NATIONAL ALLIANCE Patrick Pruaitch Post Courier Sam Abal Sir Puka Temu