An opportunity to kickstart PNG economy 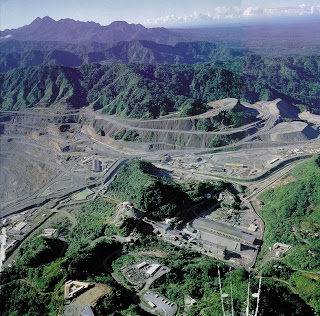 THE Bougainville mine's development was fast-tracked by the Australian government.
This occured when pressure built at the UN for Canberra to grant early independence to Papua New Guinea.
The mine was intended to provide the new nation with solid income in addition to aid.
In the 17 years from 1972 to 1989, it contributed about 44 per cent of PNG's exports, about 17 per cent of the government's revenue, and 10 per cent of PNG's gross domestic product. It employed 2800 people.
The mine had been built by Rio Tinto in the face of landowner opposition. Women -- through whom land in much of Bougainville is inherited -- lay down in front of bulldozers.
It took until 1980 for the original compensation package to be signed with 600 families.
PNG's decentralisation to 20 provincial governments resulted from Bougainville's threat to pull of PNG in 1976, a fortnight before Australia was due to declare it independent -- threatening to rob the new state of its main income earner.
But deals were done, royalties were offered, the mine was built, and it contributed substantially towards Bougainville acquiring the highest living standard in PNG. The project trained a generation of tradesmen -- with 1000 completing full trade apprenticeships and 400 graduate and postgraduate studies -- who can still be encountered all over the country, running their own car workshops, working as supervisors on engineering developments, or at other mines including Ok Tedi and Porgera.
However, younger landowners felt cheated by the royalties deal, which compensated only the older generation, and the PNG government failed to seize the option to renegotiate the deal every seven years from the original 1974 agreement.
A new landowners' group emerged, which felt increasingly frustrated at being ignored. Anger spilled over into violence, and the mine was closed on May 15, 1989, after two employees died and 20 were injured. Power supplies to the mine had been cut by the felling of power pylons with explosives. The number killed in the fighting is unknown, but it probably totalled almost 1000.
Many more died as a result of the collapse of infrastructure and of health services.
In 1990 a ceasefire began, which has largely held since. A deal was eventually signed providing for a withdrawal of PNG soldiers, a peace monitoring group, and ultimately greater autonomy, and a referendum on independence between 2015-20.
New governments, responsible for all activities except defence and foreign affairs, have since been elected, which have favoured reopening the mine, with the Bougainville economy struggling.
Before the 10-year civil war, it was not only the mine that was booming.
Large investments were pouring into agriculture, especially cocoa, benefiting from the island's fertile soil.
But the manner of the mine's closure left lingering doubts in the minds of would-be investors.
Reopening the mine would restore confidence to the rest of the economy too, underlining that Bougainville is back and open for business.
John Momis, the new President of Bougainville, says the mine "will kickstart developments".
Bougainville Copper Ltd John Momis Bougainville Revolution Francis Ona Joseph Kabui Ok Tedi Panguna PNG Pogera Royalty