PNG patrols take aid where it is needed 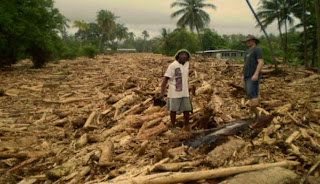 AID workers in Papua New Guinea will be making health patrols to isolated villages, in the steps of predecessors who brought the New World to locals more than 60 years ago.
Australian patrol officers, known as kiaps, often trekked for days in harsh conditions, spreading the idea of government and law and order to villagers who had never seen white faces before.
A product of the colonial era, the kiaps brought much-needed health supplies and new tools. They provided basic education and prolonged villagers' life expectancies.
Advertisement: Story continues below
Since independence in 1975 PNG governments have failed to deliver in remote areas despite huge resource revenues.
With the kiaps now a distant memory, PNG is filled with highly paid advisers and consultants who rarely get their boots muddy or leave their air-conditioned Port Moresby offices.
But late last month, in a significant shift of approach, an Australian special forces soldier and a doctor and nurse team helped PNG Defence Force medics treat 206 villagers in Goilala district, in Central Province.
The Australian Defence Co-operation Program sponsors all patrols by the PNG Army in Central Province. AusAID, seeing the patrols' success, became involved and provided vaccinations.
The team trekked in the rain for a week through the rugged Owen Stanley ranges, immunising children, treating cuts and blisters and providing medicines for arthritis, malaria and worms.
The head of AusAID in PNG, Stephanie Copus-Campbell, said support for foot patrols was part of a ''significant shift'' in helping the PNG government provide better services.
AUSAid Australia. Papua New Guinea Kiaps Patrols PNG Stephanie Copus-Campbell