PNG PM steps aside to answer allegations of misconduct 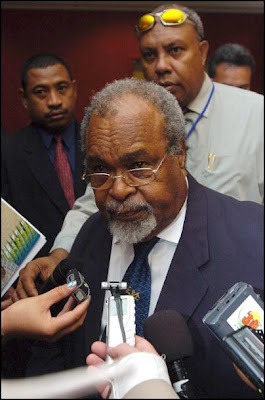 Papua New Guinea's Prime Minister, Michael Somare, has announced he will step aside as the country's leader so he can face a leadership tribunal regarding alleged misconduct in office.
Sir Michael issued a media release late yesterday outlining his plan to ''voluntarily step aside'' after his lawyers earlier in the day failed to stop the public prosecutor advising the country's Chief Justice to set up a leadership tribunal.
A newly appointed deputy prime minister, Sam Abal, will assume full function and responsibility of the office of the prime minister while Sir Michael attends to clearing his name, the media release said.
''While the supreme court has yet to give the PM an opportunity to be heard on his reference, the public prosecutor has proceeded to make a referral. The PM respects the due processes and will continue to avail himself to hearings.''
Sir Michael referred to yesterday's court debacle as a ''gross injustice'' considering the judge went missing and could not be located to hear the matter.
Sir Michael's legal team was to argue that the Ombudsman Commission failed to follow procedures, in effect invalidating the commission's report on alleged improprieties regarding his listing of financial records.
These are the latest twists to PNG's second week of political drama, in which there has been a snap cabinet reshuffle and a supreme court ruling that the re-election of the governor-general was invalid.