WHERE IS ALL THE MONEY GONE TO? 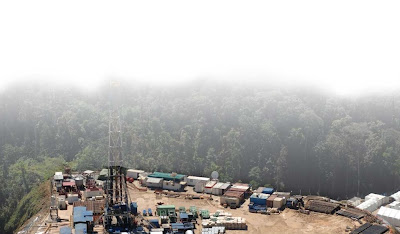 The 11th Mining and Petroleum Conference in Sydney, Australia kicked off yesterday. And in a packed room, PNG’s Oil Search Limited, a major partner in the LNG project, shocked the experts and government officials including ministers from both countries that it has spent a whopping K11.931 billion in oil benefits between 1992 and 2009.
And that is nothing on the ground to show for this money, the company says. That is the verdict from oil industry supremo Dr Peter Botten of Oil Search Limited who said there was “no significant appropriate improvements in living standards” had occurred to Papua New Guineans from billions of kina received by landowners, provincial governments and the national government as resource benefits over the last 17 years.
Today we are told some 200 people have died from cholera in Western Province. Apart from Cholera, TB, Malaria, HIV/AIDS, Cancer and many other diseases are killing our people. The National Department of Health has admitted that our health indicators are not good because health facilities are falling to pieces.
On the education front, more than half the students that are coming out of grade 12s, and grade 10s this year are expected to return home or be enrolled in technical and vocational training schools because there are not enough places in existing tertiary institutions and secondary schools. Two of the premier national high schools – Kerevat and Aiyura – are in the news over their deteriorating infrastructure. They are not alone, as many community and high schools are faced with the same situation. Schools have also reported that they are faced with shortages in teaching aids and materials.
On the infrastructure sector, the national Works Department revealed that it required over K1 billion to repair the 9000km of national roads in the country. The most important road asset, the Highlands Highway will require some K7 billion to fix and this money the country does not have. Apart from the national roads, all provincial roads have deteriorated, thus becoming a big impediment to going business as well facilitating the flow of much needed government services into the rural communities.
Combined with these, poverty is high, even in urban areas and this is believed to be driving the crime rate high, as people look for ways to survive.
Now if Oil Search has pumped in K12 billion over the last 14 years, then how about the others. Take for example the Ok Tedi copper mine, the Porgera gold mine, the now closed Misima mine, the Tokoluma mine and the Lihir gold mine.
These projects have contributed in taxes, royalties, and other benefits to the people of Papua New Guinea. Where has all the money gone?
Today PNG is focus on the LNG project. The government is going full steam ahead and it is boasting to the world, and even at the current Sydney conference, that PNG economy stands to gain immensely.
Early works on the project has started and to date, over K2 billion has been spent. The area where the LNG project is located has been exporting oil for a long while now. Are there any tangible changes on the ground in the Southern Highlands and Hela provinces?
It is no wonder that the Australia Government pushed for the Sovereign Welfare Fund to be established and the fund held in Australia, for revenues from the LNG project to be parked for future use.
The issue now is the governance of this fund. Experts are concerned over the form and manner this fund will be managed because of the experience this country has had in the management of all the revenues from its existing resource based projects over the years.
And this is bound to come out at the conference in Sydney and let us hope that the big PNG contingent wake up and listen to what people like Dr Botten is saying. Arrogance should have not a place there.
AIDS Development Failure government HIV LNG natural resources Oil Search Peter Botten PNG Waste