WILL HE RIDE THIS OUT, JUST LIKE LAST TIME? 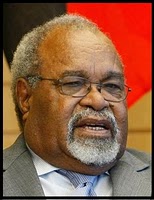 A community leader from Mt Hagen rang this newspaper last night to confirm what he heard on the radio - was it really true that a leadership tribunal had been set up to hear allegations of misconduct in office against the Prime Minister Grand Chief Sir Michael Somare?
The call from this leader in the mountains might just have been another curious member of the public but more significantly, it shows the interest with which ordinary Papua New Guineans have in this particular case.
The Prime Minister’s referral has been in the public domain for such a long time it has often been used as a political weapon against the Prime Minister by his opponents, for which there are many, because he has vigorously fought it legally.
This remote community leader, far flung from the corridors of powers of Waigani, shows how Papua New Guineans country-wide have watched and waited for an outcome such as announced yesterday afternoon by the Chief Justice after a long time – a Leadership Tribunal to hear the misconduct allegations against the Prime Minister .
The PNG public has watched the political developments in recent months sparked off by the events related to the PM’s misconduct in office charges. They want the issue to come to a conclusion – Sir Michael to face the tribunal which will either clear his name or find him guilty as charged.
The announcement of the tribunal set up should release the pressure valve on a number of fronts including questions raised about political bullying to stop the tribunal being set up.
Just on Friday the man responsible for referring Sir Michael to a leadership tribunal Jim Tamate was sacked from office for “non-performance’’ according to Attorney General Sir Arnold Amet. While that might be the case, public perception is that he paid the price for daring to do what he did.
Papua New Guineans can’t see the sense in choosing this time, for such a decision to have been taken against Mr Tamate. Why did it take two years to find out he could not do his job properly? Surely that would have been evident after six months?
Grand Chief Sir Michael Somare was referred by the Ombudsman Commission to the Public Prosecutor for alleged misconduct in Office on May 26. The Ombudsman Commission found that the PM was guilty of misconduct in office in relation to his failure to furnish the Commission with four annual statements from 1993 to 1997, his failure to submit when due five statements from 1998 to 2004 and incomplete statements from 1992 to 2005. Since May, the Prime Minister has been in and out of the Waigani Court rooms, either to stop the Ombudsman Commission from conducting the probe and the Public Prosecutor from referring him to the Chief Justice to appoint a Leadership Tribunal. The public watched as the PM’s lawyers and the Government tried all it can to avoid Sir Michael from facing the tribunal.
The media attention on Sir Michael is nothing new. Since he began his political career 40 years ago, he had been in the limelight his entire life and he is used to the attention he gets. However in this case, it was all for the wrong reason and it went on for three years but whether that affected him in anyway nor not, it is hard to tell. For Sir Michael continued to perform as the Prime Minister of this country over those troubled times.
Yesterday the Chief Justice Sir Salamo Injia appointed a Leadership Tribunal to enquire into the allegations. And the members of the public are expected to breathe a sigh of relief for the tribunal will investigate into the charges and from its findings, will determine whether the PM has breached provisions of the leadership code or not.
He assured the public that he will step down as PM when a tribunal is appointed but that again is in the hands of the tribunal. The PNG public is watching to see if the man, whom they fondly refer to as their father, will ride this, probably the roughest storm of his colourful and illustrious career, out.
Jim Tamate Leadership Tribunal Michael Somare Ombudsman Commission Papua New Guineans Prime Minister Public Prosecutor Sir Salamo Injia Waigani