POLITICAL COUP OF THE DECADE 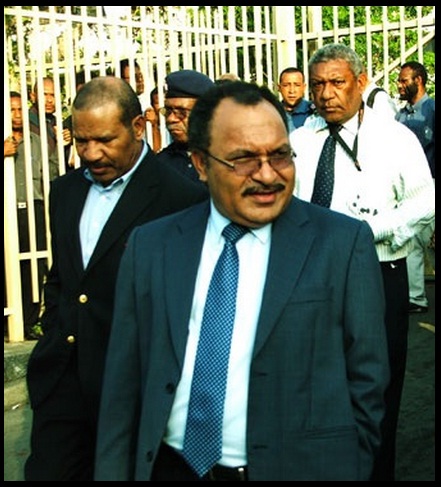 THEY are, without doubt, the political coups of the decade. Of course, those involved will be disinclined to publicly voice it or even take credit for it. Nonetheless, they shall become coups worthy of mention in the annals of history. With less than one-fifth of parliament, the opposition on Tuesday threw asunder the most stable government in the history of PNG. That was the first coup.
The second, of course, was the ascension to the prime minister’s post by Ialibu-Pangia MP Peter O’Neill. From about sixth position in the line-up for the post, O’Neill has become the dark horse that has stormed to victory in the last 50m.
With less than six MPs, the People’s National Congress has triumphed over the NA, the United Resources Party, the PNG Party and Pangu Pati to take the coveted prize. How the two coups took place will unfold in due course but suffice it to say for now that they are quite stellar performances, masterful strokes if you will.
The wounds the first coup has opened will, perhaps, never heal for many players. It is no small feat. The opposition had less than 20 MPs. It did pack a number of credible big names in PNG politics in the likes of Sir Julius Chan, Sir Mekere Morauta, Bart Philemon, Sir Puka Temu and young energetic and noisy guns like Belden Namah and Sam Basil but, together, they could not muster the numbers to even defeat a minor ruling by the speaker.
Then, by a masterful stroke, the opposition used the long absence of the sick and ailing Sir Michael Somare, the prolonged and public struggle for leadership of the highlands faction of the NA, and the natural greed of leaders in the face of an onrushing general election, to engineer a coup where it offered all to whichever group in government wanted to cross the floor to elect a new prime minister.
A little known or used provision of the Constitution, hidden in the schedules, was evoked and the rest is now history.The ruling National Alliance party, with 42 members, is now camped on both sides of the political divide. Will it ever come together and, more importantly, will it muster the numbers, the resources and the will-power to take on the general election which is nine months away?
Just last week, despite the public power struggles by its highlands faction, NA remained the team to beat in the elections. Today, that certainty is will-o-the-wisp. The fact that this coup has been orchestrated by none other than former NA members in Namah and Sir Puka is bitter sweet. Now that some are in the same camp, how do they make up is a thought. Perhaps, the southern NA leadership can revert back to Sir Puka.
The United Resources Party, as the second largest party in parliament, is split right up and down the middle with half of its membership supporting its leader William Duma in government and the other half with its founder, Anderson Agiru – presumably in the opposition. Other parties such as Pangu Pati and People’s Action Party are also split.
Only O’Neill’s People’s National Congress moved as a solid unit across to take up government. This, then, is the line-up going into the 2012 general election, unless the courts intervene in the process. The Warangoi Accord is dead. It is uncertain who will stick with whom going into the elections. What is certain is that the old pecking order is dismantled completely. It is going to be every party for itself. That is recipe for chaotic government in the days ahead.
It is important that the prime minister takes charge immediately and set the agenda. Most urgent must be the 2012 budget and, particularly, the management of the development budget.He must attend to the thievery of customary land under the guise of special agriculture and business leases. He must find out what has happened to the K120 million of workers’ funds which, somehow, ended up as a treasury bill project in the Kokopo district.
He must attend to the fisheries and forestry sectors where there is so much potential but neglected. Of course, the LNG project is a priority as is the other one promoted by InterOil. This is the challenge for the new prime minister. His future in politics will be determined by how he manages the welfare of this nation in the next nine months.