Its pleasing to note that the O'Neill-Namah Goverment is really serious about the prevalence of corruption in this country and trying to eradicate it. Corruption is like a cancer that is eating away our country I commend the Goverment for its firm uncompromising stand against this sickness of corruption. In my opinion corruption has become a way of life in PNG and its going to kill this country if we dont join forces and do something positive.
If Mr. Prime Minister is genuine about cleaning corruption in this country, then he must first carry out cleaning exercise in the departments/agencies that are under his jurisdiction. He must start with his wantoks who are corrupting this country. One of the most corrupted agencies under the Prime Minister's jurisdiction is the Mineral Resources Development Company and Group of Companies. This important organisation is headed by Mr. O'Neill's wantok, Mr. Augustine Mano who is alleged to have stolen millions of landowners money in the name of investing for them. MRDC manages hundreds of millions of oil, gas and mineral resources owners funds, future generations fund, project funds etc. 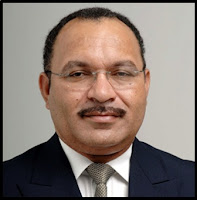 According to a confidential brief, the MRDC under Augustine Mano has spent hundreds of millions of investments for landowners. However, the manners in which these transactions are conducted appear to be disturbing and illegal as they are done outside normal procedural requirements and processes. The current management is riddled with serious cases of non-compliance and deliberate avoidance and ignorance of set procedures and processes, more so in isolation of the MRDC Board.
The Managing Direcotr is a young man with no experience at all in high level management exposure which is why he is very sloopy and incompetent in the important office he occupies.He never got the job on merit. He came in through back down...in fact he bought the job.
Augustine Mano will go into the history books of PNG as the most travelled head of a government agency in a very short span of time. The rate of Mano's travel is measured in such a manner that, in a month, he stays in the MD's office for 3 days, meaning the rest of the days he is out on travel overseas. So in a year, his total clocked in time in the MRDC office would be a month. The cost of his travel is excessive and far exceeds any agency's budget. He appears to be the most costly head of a govt agency. He must have made hundreds of thousands of kina through travel allowances and other benefits at the expense of the landowners.
There is a "Confidential Brief" regarding Serious Issues of Management and Miscounduct at MRDC prepared for the Chief Secretary dated 6th May 2011. I am sure most of the State agencies, such as Police, Fraud Squard, Ombudsman, Transparency International, Media, Prime Ministers Dept, and other state agencies have this report in this possession. I am sure the Prime Minister has this Confidential Brief with him. We landowners are watching you very closely to see what kind of action you take against the MRDC Management. Augustine Mano has recently been seen walking in and out of your office and we know your relationship. If you are serious about corruption then you'll have to start with MRDC, which reports directly to you!
Anti-Graft - PNG