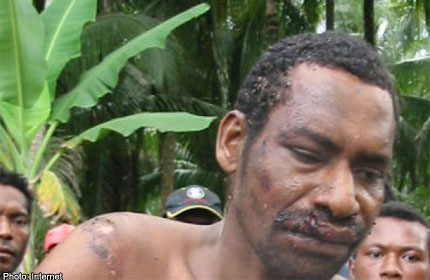 A manhunt was under way on Sunday after 49 prisoners, including an infamous cult leader known as “Black Jesus” who is suspected of cannibalism, broke out of a jail in Papua New Guinea.

The escape happened from a prison in Madang on the poverty-stricken Pacific nation’s east, with convicted rapist Stephen Tari among those that got away, Australian media reported.

Tari, a failed Lutheran pastor who was widely known as Black Jesus, was found guilty in 2010 of raping girls who belonged to his Christian-based sect and sentenced to up to ten years.

At the time, he had thousands of village followers, including a core of armed warriors to protect him, in what is commonly referred to in PNG as a “cargo cult”

As part of his “culture ministry”, he preached that young girls were to be “married” to him as it was God’s prophecy.

When he was captured in 2007, there were widespread allegations that his cult also practised cannibalism and sacrificial blood rituals, but police only charged him with rape.

PNG police could not be reached on Sunday but PNG Correctional Service’s spokesman Richard Mandui told the Australian Broadcasting Corporation the break out on Thursday occurred while guards were changing shifts.

“Actually, one of the guards left his guard tower,” he said.

“While he was on the way, the detainees found a gap. They left for freedom.”
He said they used an unidentified tool to cut through a fence.

“These people are very, very dangerous and they may be armed,” he said, adding that Tari was a particular risk.

“He must be arrested because our ladies will most certainly be at risk due to his past offences.”
PNG is a sprawling nation where black magic, sorcery and cannibalism sometimes occur.

Last year, police arrested dozens of people linked to an alleged cannibal cult accused of killing at least seven people, eating their brains raw and making soup from their penises.

There have been several other cases of witchcraft and cannibalism in PNG in recent years, with a man reportedly found eating his screaming, newborn son during a sorcery initiation ceremony in 2011.