Once a crook always a crook 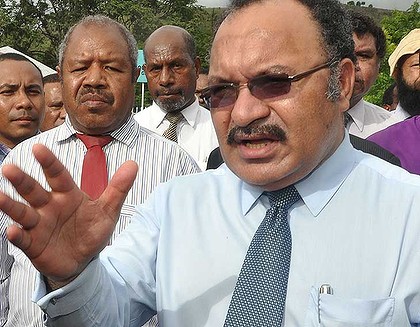 Peter O’Neill was one of the three people who orchestrated the NPF Tower Fraud. He helped steal millions from the retirement savings of ordinary Papua New Guineans and he has never been brought to justice.
Mr O’Neill, Jimmy Maladina and Herman Leahy shared in the K2.5 million from the scam.
There was a Commission of Inquiry into the NPF. It recommended various people be prosecuted for stealing, amongst other offences. One of them was Peter O’Neill.
In what is now known as the Tower Fraud, Kumugai Gumi were contracted to build what is now known as Deloitte Tower in Port Moresby – a large multiple story office building. The original contract price was about K47 Million. But will Bill Skate and his boys badly managing and plundering the country, the Kina was on the slide – from 1:1 with the Australian Dollar in 1997 it had quickly slid to K1 = .75c in 1998/99
Kumugai Gumi began to hurt. The building of the tower was not a hugely profitable project and was really a vehicle to entrench them in the market in PNG. It was however relying upon materials from overseas, and it was going to do very badly on the project if there wasn’t a contract variation to allow an increased payment to cope with the exchange rate variation.
Herman Leahy was the in house lawyer at NPF. The legal work on this contract was actually briefed out to a private firm – Carter Newell, a firm in which Jimmy Maladina was a partner when he was appointed Chair of the Board of NPF. Carter Newell gave advice to NPF that NPF didn’t have to pay any extra money to KG.
Knowing this, Maladina and Peter O’Neill hatched a plan – that Jimmy would call the boss of KG in, and tell him that he would get him a contract variation of K3.3 million BUT that KG would have to ask for K5.8 million and that Jimmy would ensure that KG would be paid the K5.8 million, but that then KG would have to pay K2.5 to Jimmy (and then Jimmy was to share that with Peter and Herman). The Japanese boss of KG, who didn’t speak English very well, refused. Jimmy then told him that KG would never get an increase in the contract unless it was according to Jimmy’s plan. Jimmy also told the KG boss he had friends in high places including the PM, and that the KG boss had no-one to complain to. The KG boss left Jimmy’s office and did not agree initially to the arrangement but more pressure was later put him by Jimmy, and he eventually agreed.
So the K5.5 million was paid by NPF to KG as a contract variation, and KG duly paid Jimmy the K2.5million. Then Jimmy shared it with Peter O’ Neill and Leahy.
The Commission of Inquiry traced the K2.5 million through Jimmy and Peter to a total of 13 more people, including Herman Leahy. They didn’t hide their tracks well. Peter used the money to pay American express bills and his Aviat club membership etc. All copies of bank statements and original cheques were obtained. It also helped the Commission as KG executives agreed to give evidence against Peter and Jimmy and Herman in the hope that they would not be prosecuted. All the evidence was put before the Commission and it recommended Jimmy and Peter and the others for prosecution. The final report came out in 2003.
Jimmy fled the country. Eventually he came back and he and Herman were initially charged, but their cases were individually thrown out by magistrates.
Herman was then indicted by the Public Prosecutors’ Office, which he appealed and finally after a couple of years the court decided to reject his appeal.
It was announced in the newspapers that there would be a joint trial for Jimmy and Herman.
Peter O’Neill has NEVER been charged.
This is what the NPF Commission of Inquiry said about Peter O’Neill
“…the commission made a thorough study of Port Moresby First National Real Estate’s accounts and traced all moneys paid in and out on account of Mr O’Neill.  This conclusively showed that Mr O’Neill had definitely benefitted from the proceeds of the NPF Tower fraud. It also showed that, despite his denial’s, Mr O’Neill is the beneficial owner of PMFNRE and that Mr Sullivan and Mr Awela are his nominee shareholders. It is quite clear that there is a relationship between Mr Maladina and Mr O’Neill whereby they have benefitted jointly from the NPF Tower fraud.”
This is what the NPF Commission of Inquiry said about the K2.5 million
“This claim was spurious and was agreed upon between Mr Maladina and Kumagai Gumi managers (under pressure from Mr Maladina) to enable the money to be channelled through Kumagai Gumi and on paid for the benefit of Mr Maladina, with shares for Mr Leahy and Mr O’Neill (through the account of Carter Newell and PMFNRE). NPF is entitled to recover this K2.505 million.”
PNGBlogs