May 19, 2014
PM interferes in Constitutional Office of Ombudsman - what new illegality has PM now ordered? 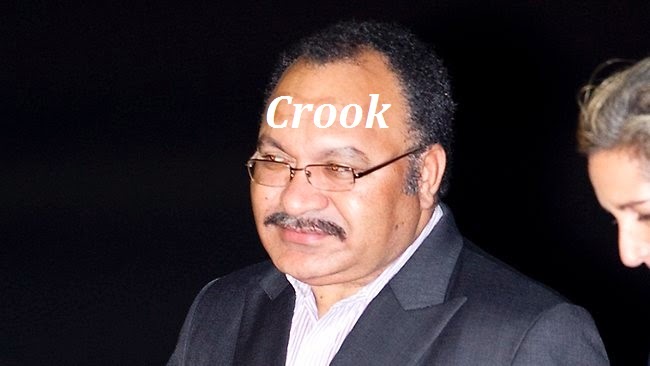 Peter O'Steal's illegal and corrupt USB loan is in crisis. The first repayment was due last week, and guess what? As everyone knew, the Ombudsman Commission's recent directives ordering a halt to all activities on the loan meant that payment could not be made.

The Treasury Secretary, Daire Vele, wrote to the Ombudsman Commission saying state will be in default if the payment is not made, and asked if they could go ahead make the payment.

The Ombudsman Commission said NO.

The next thing Peter O'Steal himself rings the Ombudsman Commission and instructs it - INSTRUCTS THE OMBUDSMAN COMMISSION, A CONSTITUTIONAL OFFICE! - to allow the State to make the payment.

The toktok in Waigani is that Mr O'Steal is now looking for ways and excuses to sack the Ombuds.

Of course this all raises some very important questions:

Is the State already in default on Mr O'Steal's big fat corrupt and illegal loan?

If so, what is UBS going to do? Cancel the O'Steal deal in its entirety? •
If so, what will be the cost to the State and to the people of Papua New Guinea?

Or will UBS renegotiate the repayments schedule until their good friend Mr O'Steal "deals" with the Ombuds?

Or did a third party make the payment for the Government?

What about some help from Pertussio Capital, advisers to the State and whose owners and directors are Mr O'Steal's mates Daire Vele, Nathan Chang and Lars Mortenson.

Maybe Oil Search chipped in -  again a good friend of Mr O'Steal's and a beneficiary of his totally corrupt and illegal big fat loan?

So much money was made on the sidelines of the O'Steal deal that surely there is enough loot floating around for someone to make the first payment on behalf of the State.

But of course legally that would still be in breach of the Ombudsman Commission's directives. And of course if the State had eventually to repay such assistance, that would also be illegal and corrupt.