COVERING UP CRIME AT UPNG 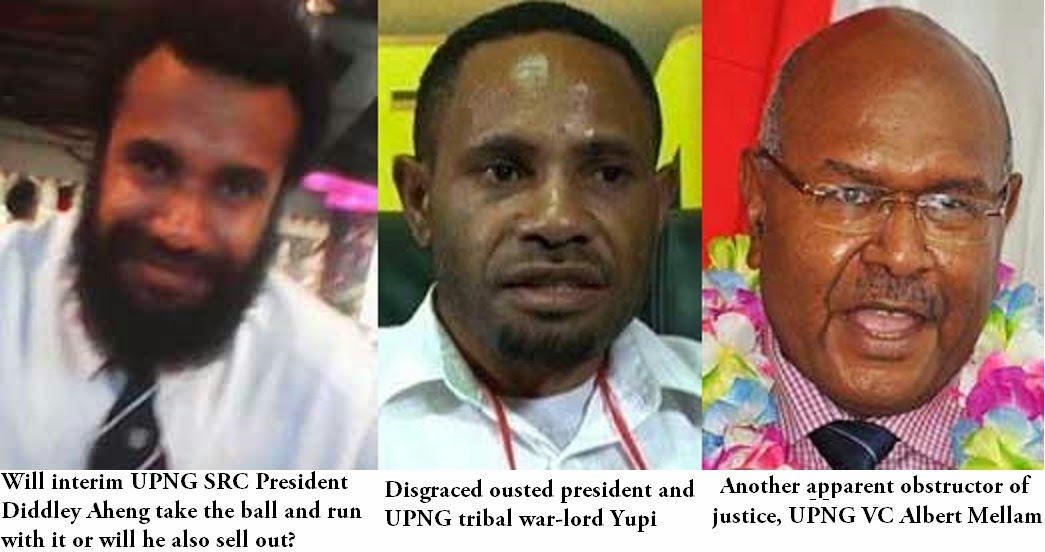 There is Growing Student Anger about your handling of the Bobby Yupi scandal.

1: Why so much silence by UPNG administration about the violence carried out by disgraced SRC president Bobby Yupi and his few supporters during  what was otherwise a peaceful forum?

2: Why hasn’t Bobby Yupi been arrested and charged for organising violence on main campus during the past forum?

3: Why has UPNG administration and SRC allowed Yupi to remain as SRC president?

All main facts are undisputed by vast majority of those in witness with eyewitness testimony and photographic evidence.

This is not like breaking a university rule so that it can be dealt with internally.We are not blind. We see your attempts at cover up.

Your silence is part of your corrupt strategy to stop justice for UPNG students against the violence organiser Bobby Yupi.

You, VC Albert Mellam, are playing the same game as Paul Paraka, Peter O’Neill, and other corrupt thieves.

WE CAN SEE YOUR DELAY TACTICS AND COVER UP

VC, your strategy is to let the clock tick without doing anyting hoping that we students have poor memories and will soon forget about Bobby and his attack on innocent students.

This is the strategy to keep Bobby Yupi out of jail which he rightfully deserves.

Bobby Yupi’s cavemen supporters are intimidating other students into participating in the cover up by making them scared to speak out the truth of what they witness.

NO INTERNAL DISCIPLINARY ACTION FOR BOBBY YUPI AND HIS CAVEMEN ATTACKERS!!!

DO NOT DENY THE COURTS OF PNG THE OPPORTUNITY TO HEAR THE CASES AGAINST THEM.

ASSEMBLE THE EVIDENCE OF WHAT HAPPENED DURING THE FORUM AND GIVE IT TO THE POLICE!

JUSTICE FOR ALL THE UPNG STUDENTS FRIGHTENED AND ATTACKED USING THE COURTS OF PNG!

THIS ISSUE IS NOT GOING AWAY, VC MELLAM.  NOT A WEEK FROM NOW, A MONTH FROM NOW, OR EVEN 1 YEAR FROM NOW.