November 01, 2014
By JACK P LOMBE
Foreign Affairs and Immigration Minister Rimbink Pato joins an elite group of Papua New Guineans, including the Prime Minister himself (below) who have had their pictures taken with US President Obama and his wife.   We wonder if the President was told anything about the shady pasts of Pato and O’Neill.  Looks like the American Embassy and its CIA agents in Port Moresby need to pull up their socks.  Maybe the Secret Service too since they’re the ones with responsibility to protect the American president from any harm, including getting dirtied by being seen associated with corrupt politicians from banana republic governments. 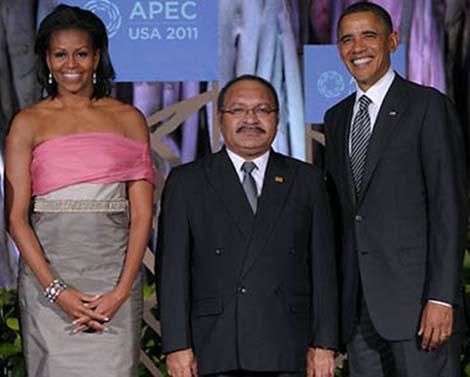 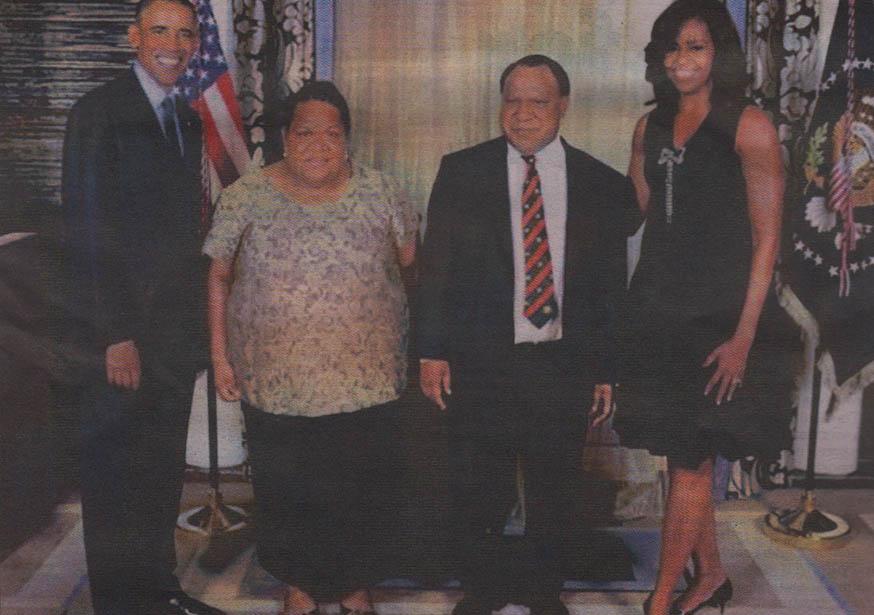 Hopefully no corruption louse jumped off of these two onto the president and his missus when they touched shoulders.  But you’ve got to hand it to O’Neill and Pato.  They succeeded where Don Polye could not.  Even exaggerating his honourary, powerless appointment as World Bank Chairman into being something incredibly big and important to naïve citizens back home didn’t carry any weight with the US government.   Polye lost the competition to be photographed with Obama.
We don’t need to go into O’Neill’s disreputable past, the public record all starts with the 1999 NPF fraud, of course, and has continued unabated with what is becoming countless scandals tied to the poor man.   The CIA doesn’t need any help to quickly find out all the details about O’Neill and don’t leave the Israelis out of the picture.

The Duck’s dishonourable actions are less known so probably it’s time to bring up what has long been the conventional wisdom about Rimbink Pato in the high halls of power.
Starting out as a lawyer in PNG is the first black mark against Rimbunk Pato since the alternative name for “lawyer” in PNG seems to be “money grubber”.   But The Duck has gone off in to other lucrative areas over the years.

The first fact about The Duck is that he’s been a pal of O’Neill’s ever since NPF days and in fact did his best to try and lesson the damage of the scandal for O’Neill.   This is why despite being only a first time MP, O’Neill quickly appointed Pato as Foreign Affairs and Immigration Minister and set him traveling around the world in luxury to conduct this, that and the other meetings with people important and unimportant.   It is his reward for past loyalty, much the same way as O’Neill has rewarded chronic gambler Isaac Lupari for helping him strongarm officials back in the late 1990’s when O’Neill was trying to drum up management contracts for his real estate business. 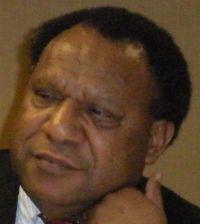 Rimbink Pato was Peter O’Neill’s lawyer, representing him during the infamous NPF inquiry that revealed to the world for the first time Peter O’Neill’s techniques for stealing money without getting caught.   Pato also took over Peter O’Neill’s position as Chairman of Pacific Finance Group of Companies and helped disappear evidence and otherwise protect his friend.   O’Neill’s principle position was in that Chairman’s position when he committed his NPF frauds with Jimmy Maladina.

As Chairman of Pacific Finance Group of Companies, Pato awarded himself an employment contract valued at K300,000 per month, and obscene amount at the turn of the century.  He was also implicated around that time as one of two former chairmen of the old PNGBC who wrote off K50 million as bad debts to company's they had a personal, vested interest in.  Those are scams of a calibre almost worthy of comparison to Peter O’Neill!

Pato’s greatest claim to fame for many years in Port Moresby high social circles was his ability to pay kickbacks to people inside government to hire his obscenely priced legal services.   This included for awhile, doing work for Morobe Provincial government under Luther Wenge.

Yes, Rimbink Pato is proof that as one of the corrupt elite of PNG, you not only can get away with your crimes, but even get a photo standing next to the most powerful man in the world so he can show his grandkids what a respectable, honest fellow he is.