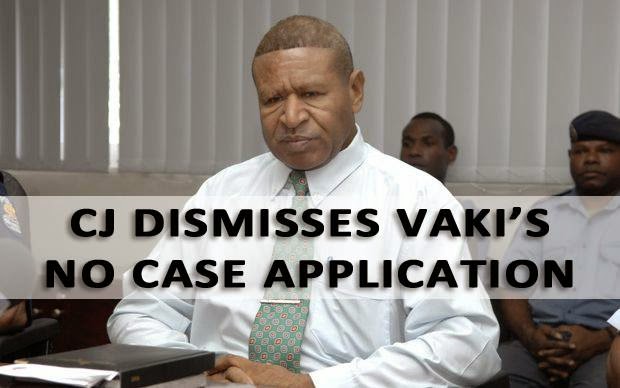 National Court presided by Chief Justice Salamo Inja this afternoon (26/2/15) dismissed a No Case Application made by Police Commissioner Geoffrey Vaki seeking to strike out the contempt of court proceedings against him that is currently under trial in the National Court.

National Fraud & Anti-Corruption Directorate Mathew Damaru and his Deputy Timothy Guitau filed four contempt of court charges against Vaki in relation to his alleged refusal to effect the warrant of arrest against the Prime Minister Peter O'Neill in June 2014.


The trial commenced on Tuesday 24th February 2015 were plaintiffs Damaru and Guitau opened their case calling six witnesses to give evidence. Damaru and Guitau were called to give evidence as well as Police Lawyer Nicholas Nirivi, ABC foreign correspondent Liam Cochrane, Adrian Mathias of Mid Week Chronicles and Malum Nalu of National. They testified Vaki stated he would not arrest the Prime Minister.

Egan assisted by Nale closed their case today, immediately after Vaki's lawyer filed a No Case Application in an effort to dismiss the proceedings.

Vaki's lawyer submitted that the charges against Vaki failed to meet with requirements of contempt of court in that Vaki was never personally served the warrant and had no knowledge of it and even if he had the warrant was ambiguous in it failed to prescribe a date the orders (arrest against the PM) was to be carried out.

Damaru & Guitau's lawyer argued that Vaki issued instructions by his own letter to Mawa Lawyers who he had briefed out to represent the Police to support the Prime Ministers application in the National Court for a permanent stay on the warrant of arrest. This confirms Vaki had knowledge of the warrant and he was purposely interfered with its implementation.

CJ dismissed Vaki's no case application ruling that Supreme Court had substantially made some findings in respect of propriety (proper procedure of implementing) warrant of arrest. There was evidence that Mr Vaki had knowledge of the warrant and that he interfered with it's implementation. His honour held the view Vaki had a case to answer to.

Following the CJ ruling Vaki's lawyer sought an adjournment claiming their witnesses were not readily available to be called to give evidence in their defence. CJ adjourned the trial until 11th March 2014.