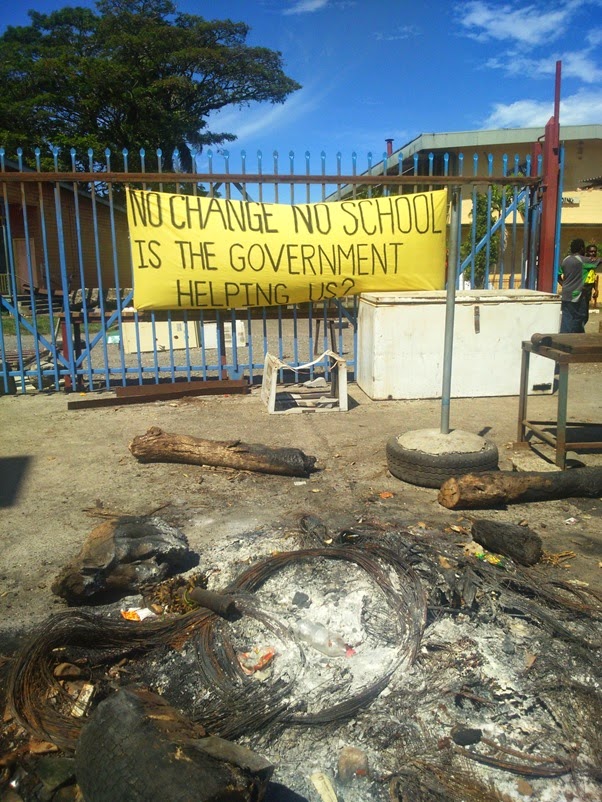 By CONCERNED PARENT
Those who have studied overseas know in an instant how bad our PNG schools are, all the way to university level.   An article in PNG Blogs some time back (http://www.pngblogs.com/2014/07/how-bad-are-papua-new-guineas.html) revealed it in black and white rankings.

Our best PNG university, Divine Word, is worse than the best university in the failed state of Somalia.   Every time politicians speak at commencements they promise schools something that almost always is never delivered.   Parents in rural areas cry for new classrooms but say nothing about teachers to teach the children, or books that allow children to learn more than their teachers.
This year we have already seen a boycott by UNRE (former Vudal College) students over mismanagement at that institution.   UNRE is one of the worst ranked universities in the world.
Now we have a student strike at Polytech in Lae.  In all cases, the core issue is bad education.   The source of that problem is continued government pretence about supporting our schools, but never putting significant money where their mouths are.

Last year we had the infamous Unitech Saga boycotts that drew national attention (http://www.pngblogs.com/2014/04/why-2014-unitech-boycott-succeeded.html).   Again the core issue was the quality of education and students getting sick of the corruption and money mis-use that had characterised the previous administration there.    UPNG joined in a strike, but it was short-lived as the government, through OHE, had close ties with the UPNG Vice Chancellor and moved quickly to compromise the boycott and buy out student government leaders (http://www.pngblogs.com/2014/08/covering-up-crime-at-upng.html).

Peter O'Neill has been a disaster for improving the delivery of quality education.   His free education strategy is nothing more than a ploy to encourage dependency on the government, which enhances handout mentality, but with the goal of generating more votes for Peter O'Neill and his PNC in 2017.   Free education has made the quality of education worse as classrooms have become  packed to the walls with roughly the same number of new teachers coming out of the system.
O'Neill's self serving "Peter O'Neill University" (http://www.pngblogs.com/2014/09/pngs-master-of-deception-unveils-new.html) to be built in his home province (of course!) is an obvious middle finger flipoff directed towards PNG's existing universities ( http://www.pngblogs.com/2014/10/go-rot-in-hell-peter-oneil-tells-upng.html ).

PNG universities have apparently overall have received no increase in funding during the entire Somare and O'Neill administrations, if you consider the effects of inflation.  They have actually declined in funding.   Despite all this, the Vice Chancellors, while apparently complaining a lot in private, have never had the guts to make this into a national issue, to be debated by all. Last year O'Neill bought the silence of Divine Word University's President, Fr Jan Czuba, by appointing him to head this new university in the middle of nowhere.

ACT NOW PNG was the first to come out on the social media, putting together all the student protests in their common thread ie that students are sick and tired of bad education and bad learning conditions in PNG (http://www.actnowpng.org/blog/k780m-stolen-why-are-students-still-boycotting-classes-rundown-facilities).

The Lae Polytech students have it right:  where it the promised money?   Where are the results of this promised money to improve their learning environment?
Where the students are wrong is in blaming the Polytech administration for the problem.   On the other hand they are justified if blaming the administration for not speaking up publically against the government's strangling of education in this country and the continued coverup of what they're doing.
May student strikes and boycotts begin to spread throughout this land in a rising testimony by students to the government and us largely silent parents that enough is enough.