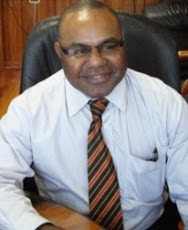 David Cannings. His Human Rights application is due to be heard on 28 May 2015.
Doctor Theo Yasause, former Climate Change boss and the former Chief of Staff to former Prime Minister Grand Chief Sir Michael Somare, has applied to Human Rights Track for the enforcement of his human and constitutional rights. Dr Yasause appeared in Court this week for a Directional Hearing heard by Justice

On Friday the Post Courier reported ‘Yasause raises human rights issue’ whilst Radio New Zealand reported ‘Jailed PNG official files complaint’, however both media outlets did not report that Dr Yasause has applied to Human Rights Track for the enforcement of his human and constitutional rights. Human Rights Track, which is headed by 'Track manager' Justice David Cannings, is a recent development in the PNG Judicial system.

“An interesting feature of our (PNG) Human Rights rules which we are informed is not found anywhere else in the world is the provisions in the rule which empowers the Court or its officers to initiate human rights breach complaints against those who offend. These provisions are found in Order 23, Rule (9) (1) of the Human Rights rules.

He had argued that he was wrongfully convicted for an offence he did not commit and is seeking his constitutional rights to be enforced under several constitutional rights provisions covering health and unequal treatment. His conviction he argued was based on fabricated evidence. Because of this and other appeal grounds it is believed that he would have 100 percent success rate in his appeal, however a decision on his appeal has been pending since December 2013.