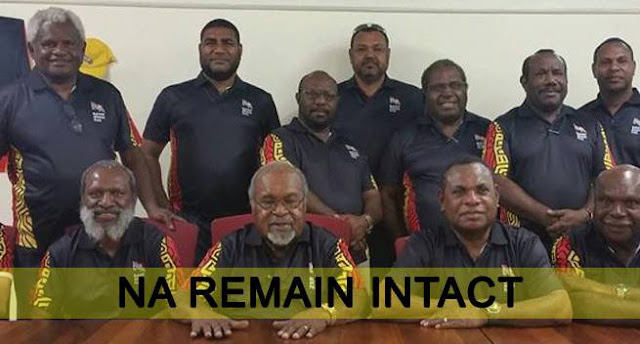 The National Alliance Party convened its first formal caucus meeting on Saturday (26/9/15). The meeting was called by four party members led by former Attorney General Kerenga Kua and Grand Chief Sir Michael Somare to discuss the concerns about the state of the economy and whether it was in the Party's best interest to stay in Government going into 2017 National Elections.

Political insiders confirmed that Pruaitch met with Prime Minister Peter O'Neill the day before he agreed to the meeting. It was alleged Prime Minister put to Pruaitch in no uncertain terms if he fails to get NA's house in order they would be sacked from his Government. Senior Ministers close to the Prime Minister were openly boasting on the eve of the meeting Pruaitch would sack both Somare and Kua from NA.

The meeting was convened around mid-day and attended by the full 14 Members of NA. The motion was moved and seconded whether it was in the best interest to stay in Government. Each member then express their view, most opposing it raising fears of losing their Ministry and being in the Opposition would affect their chances of re-election. A vote was called and in the end motion was defeated 10-4. Four in favor of the motion were Grand Chief, Kerenga Kua, Jim Kas (Madang Governor) and Wera Mori (Chuave Open).

My post analysis being it is clear that the Leader of NA Party has close ties to Prime Minister confirmed by the fact in 2008 when he was suspended following his referral to the Leadership Tribunal he handed his Ministry of Finance & Treasury to Peter O'Neill. It is convention that when a Member of Parliament is forced to step down the Ministry is kept within his Party. However due to the close personal friendship between Pruaitch and O'Neill, for the first time in PNG's short political history Pruaitch instead entrusted the country's top ministry with his close friend Peter O'Neill. Even during the impasse when NA was cannibalised and their Party Leader and then Grand Chief Prime Minister position stolen from him by O'Neill, Pruaitch never came out public in the defense of Somare nor criticize O'Neill for it. In short he was caught between a rock and a hard place loyalty to his long time friend or his Party Leader.

The fact four members of NA more notably the Country's Founding Father and three time Prime Minister has supported a motion for NA to leave Government under Peter O'Neill definitely raises eyebrows in political circles. While Prime Minister would have hoped for an outcome resulting in Somare and Kua being kicked out of his Government there was no way other Sepik MP's would be foolish enough to facilitate such a move. It would have been evident to them that while leaving the Government would make their re-election more difficult, kicking out Somare would be political suicide. Furthermore Pruatich real political value lies in his position of being the Leader of the country's second largest political party his best position is for NA to remain intact affording him more political prominence and special attention from the Prime Minister.

Further the sacking of NA from Government would have immediately started the process of a change unraveling of the Governments coalition partners and his own Party.

In my view it wasn't the smartest political move for NA to leave Government, right now the issue isn't the Government but rather the man in charge of it. It is far more difficult to convince your team mates to leave their club (Government) and play against them in the opposition than it is to just lobby to change the captain of the team.

However it was the more noble and sensible position to take but the realty is that Members of Parliament today are no longer as honorable or credible as they were in the time of independence. Ministers of Government are paid K120,000 per annum asking them to risk the comfort of their position that comes with great perks and privileges including the prestige and sacrifice it for the interest of the people and country is no easy task.

The best outcome for the NA party is that it remains intact. Any difference of opinion was put on the floor and each afforded the right to express their view before putting it to a vote. The final result accepted by the members to stay with the Government. Perhaps the result would have been far more different had the motion been the need to change the Prime Minister.

It was interesting to read today's post courier report failed to raise any of the above issues. While some are have dispelled recent rumors take it from me there are certainly interesting times ahead.
Jim Kas Kerenga Kua Leadership Tribunal Michael Somare NA National Alliance Party Patrick Pruaitch Peter O'Niell PNC Wera Mori