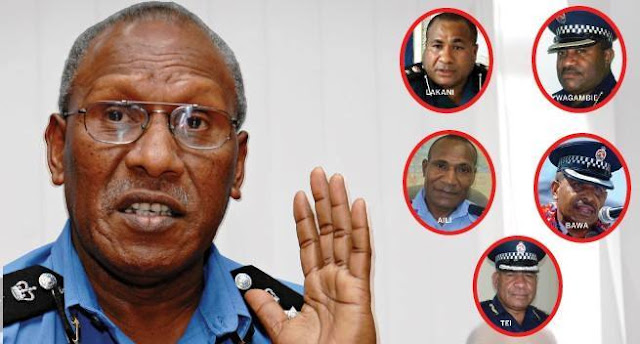 I understand the sacked officers have instituted court challenge and the public is yet to know the outcome of that court challenge but I am disgusted by the absurdity of the corrupt Baki’s unthinkable actions. He alleged that duet officers were sacked for insubordination and I suppose insubordination does not constitute sacking unless insubordination is somewhat ongoing warranting such an action. The faceless face of infamous corrupt commissioner Baki is telling.

He is hell-bent to do what it takes to deliver the corrupt, ruthless and totalitarian regime of O’Neil and his cohorts whose fate is hanging in the balance by the mercy of court. An insider at police headquarters published on PNGBLOGS an article titled “Politically Corrupt Running the Police Force” should that is anything to go by, it says it all. http://www.pngblogs.com/2015/10/politically-corrupt-running-police-force.html. Baki’s appointment replacing his predecessor was on purpose orchestrated by the corrupt King Peter O’Neil. Baki has specific task on hand and supposedly was given a checklist of what to do in a given time frame.

It lacks facts to substantiate; however, the circumstantial evidence is all there. What transpired in the week speaks volume Baki is on a suicidal mission pleasing his master who is watching from distance when all unfolds in his favour. Police department does not belong to Baki and O’Neil to recruit failed politicians and dysfunctional aging redundant officers to senior administrative portfolios and fire reputable career officers at will as it please them. Baki had no courtesy and charged at the leader of the opposition and member for Kandep Hon.

Don Pomb Polye not to say anything against his action. Given the audacious nature of Baki’s actions in the recent past and show of arrogance, is a proof he is being remotely control and become a mere puppet. Being a top cop, no way imparts him the autonomy to be ruthless to the loyal troops. In the normal public service, sacking a senior career public servant is the last measure meted out after exhausting all available avenues. For Baki to be blunt is uncharacteristic, ruthless, audacious, arrogant, mean, stupid and an idiotic leadership.

It is written all over him that there is no wisdom in him being the top cop. In the twilight of his career as discipline officer, he has proven beyond reason doubt that he is undisciplined, his action baseless and without merit. His body language reveals he venerates no other than king of corruption, serial liar and master of all deceptions Peter O’Neil. He is in to deliver his king by HOOK or CROOK, nothing less, nothing more.
2004 Police Report Corrupt Don Polye Gary Baki Peter O'Neill RPNGC