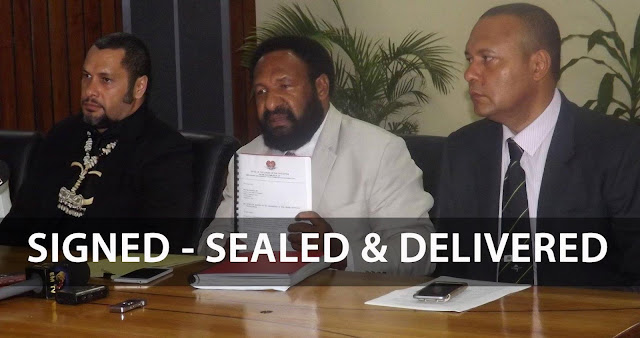 Yesterday  (Wednesday 28/10/15) Opposition has delivered on their promise to move a Motion of No Confidence against the Prime Minister Peter O'Neill.

Opposition held a press conference today before serving the motion on the Acting Speaker Aide Ganasi who is the chairman of Private Business Committee (PBC). In accordance with the Standing Orders of Parliament the PBC will vet the motion to ensure it has complied with constitutional requirements; giving no less than 1 weeks notice; signed by at least 12 MPs; nominating the next Prime Minister and is of national importance. The Clerk of Parliament will verify the signatories before it is considered by the Committee. Once approved it will be delivered back to the Clerk to list on the Notice Paper possibly for next Thursday's sitting. The motion was moved by leader of Pangu Sam Basil and the nominee is the Opposition Leader Don Polye. It seems the opposition has taken the strategic position to nominate Polye to carry the motion to the floor and reserve the right to amend it on the day it is moved.

Now that the motion is on foot it is expected back bencher's who were previously ignored by the Prime Minister will now be wined and dined by him in the guise solicit their vote. It's expected faceless men or brief case carriers that move move along corridors of Wagiani will be inducing MPs as well as the Prime Minister.
Today Supreme Court rejected Ano Pala's application to stay his arrest reaffirming the Judiciary's position that no person, Government Minister or Prime Minister is above the law. Assistance Commissioner of Police Thomas Eluh and Director of Fraud have given instructions to Pala's lawyer to advise his client to make himself available to be interviewed. Unconfirmed reports suggest Pala has possibly gone into hiding.

Eluh released a press statement saying “He’s (Pala) a national leader; he should lead by example and hand himself in. “We cannot be going around looking to arrest a national leader,” Eluh said.

Senior Magistrate of District Court Cosmas Bidar issued the warrant of arrest against Pala at the District Court in July 2014 on the charge of conspiring with former Commissioner of Police Geoffrey Vaki to defeat the course of justice by supporting Prime Minister failed application to prevent his arrest in relation to the fraudulent Paul Paraka Lawyers legal bills. Vaki was recently arrested and now facing criminal proceeding in the same matter.

We could see several other high profile Ministers face the same fate in the coming days while the motion is being deliberated on and tabled next week.
Ano Pala Gary Juffa Kelly Naru Kerenga Kua Peter O'Niell Private Business Committee Sam Bail vote of no confidence