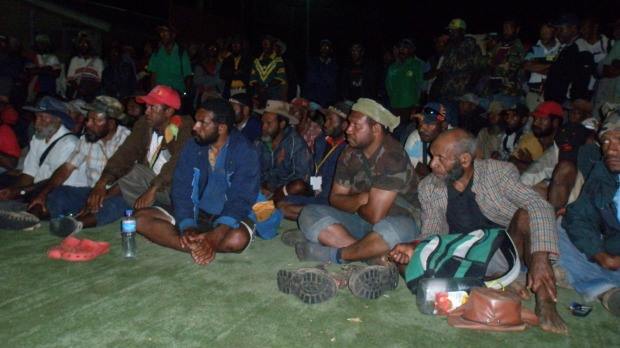 There is in an ongoing public debate between the Government and the Opposition in Parliament regarding the receipt and application of the proceeds from the sale of the LNG. In its 2015 first half Environmental and Social Report, Exxon Mobil states that its US$19billion project loaded the 100th LNG shipment on LNG carrier Methane Spirit on 15 June 2015. The first LNG cargo was shipped on 25 May 2014 destined for Tokyo Electric Power Co. Inc. (TEPCO) in Japan delivered on 2 June 2014. The LNG Project is expected to produce nine (9) trillion cubic feet of gas over 30 years. It has the capacity to produce 6.9 million tonnes per year. The report reads in part:

“The Papua, the first custom-built LNG carrier for EMPNG, arrived at the LNG Plant Marine Terminal on 22 February 2014 to begin loading its first cargo. The 172,000-cubic metre, 290-metre-long LNG carrier is the largest of its kind ever built in China. The Papua is the third LNG carrier on long-term lease to EMPNG. Two other carriers, the Spirit of Hela and Gigira Laitebo, entered EMPNG’s service in 2014. These vessels are named after the Hela Province, where the gas originates…”

The Opposition claims that the Government has directed NPCP to direct all the proceeds from the sale of LNG to an escrow account established in Singapore out of which UBS shall receive its loan repayments. It claims that NPCP and UBS have signed a “Payment Direction Deed” for this purpose.
If this claim is true, three important points may be assumed here. Firstly, the State may have appointed NPCP to receive from the LNG Project operator proceeds from the sale of LNG. It means no LNG funds are brought into PNG and kept onshore. This assumption is confirmed by Mr Bakani in a media statement: “Most revenues coming from LNG are not parked with BPNG. Companies involved in the PNG LNG were given exemptions to keep their money in off-shore accounts. Only when these companies want to pay their local commitments, they bring the funds to PNG”, The National, 2 October 2015. (The project partners are Exxon Mobil (33.2%), Oil Search (29.0%), NPCP (16.8%) Santos Ltd (13.5%), Nippon Oil (4.7%) and MRDC Ltd (2.8%)). Whilst tax would be paid directly to IRC, it is anybody’s guess whether or not funds in the form of development levy and equity components entitled to project-affected landowners, Local-level Governments (LLGs) and Provincial Governments (PGs) have been mortgaged to service the UBS loan.

The second assumption is that there is serious doubt against the Government claims that the LNG funds are held in a trust account in Singapore for “safe-keeping”. In the absence of any evidence it is difficult for the Government to convince the landowners, LLGs, PGs and the nation. Under the Umbrella Benefits Sharing Agreement (UBSA) signed in Kokopo on 21 May 2009, project-affected landowners, LLGs and PGs are entitled to equity benefits. This particular term of the UBSA are reinforced by the Oil and Gas Act 1998 and Section 98 Organic Law on Provincial and Local-level Governments. Are these benefits actually held in a trust account for safe-keeping or are they being mortgaged to UBS? These important stakeholders of the project are entitled to the truth and nothing less. Whilst these serious questions remain unanswered for now landowners, LLGs and PGs must exercise caution and restraint. It should demand answers from the Government. Why are their equity and development levy not held onshore in accordance with the Oil and Gas Act 1998?

The final assumption is that UBS would have insisted (as any financier in this circumstance would) and NPCP may have no choice but undertake to UBS that it will not revoke or amend or alter the Payment Direction Deed. NPCP may have instructed and authorised UBS to receive any proceeds held in the escrow account to service its loan. The National Parliament has the authority to demand the Government for the truth regarding this multi-billion dollar mystery.

Unless the Oil and Gas Act has been amended it is the law that MRDC receives project-affected landowners’ and LLGs’ equity funds from all petroleum projects including the LNG Project and hold them in trust. So this begs the obvious question, how does NPCP receive landowner and LLG equity funds from the LNG Project? Who ultimately decided to flagrantly ignore the Oil and Gas Act for NPCP to usurp MRDC’s statutory function?

As for the royalty payments Mr Bakani has confirmed that BPNG is holding in trust landowner royalty payments from the LNG Project pending social mapping and landowner identification study. There should be no such identification and social mapping need for project-affected LLGs and PGs. So after more than 100 shipments of LNG cargo, are PGs and LLGs receiving their share of the royalty and equity payments? Perhaps MRDC is receiving these payments so there are no concerns by the respective PGs and LLGs. The affected PGs and LLGs are those in Hela, Western, SHP, Gulf and Central Province.

Given the ongoing public debate there is confusion as to the truth about the status of project-affected landowners’, LLGs’ and PGs’ equity entitlements derived from the LNG Project. They are entitled to the truth. It is time for the Government who promised to the nation at the time of taking office in August 2012 to be “open, transparent and accountable Government” to walk the talk.