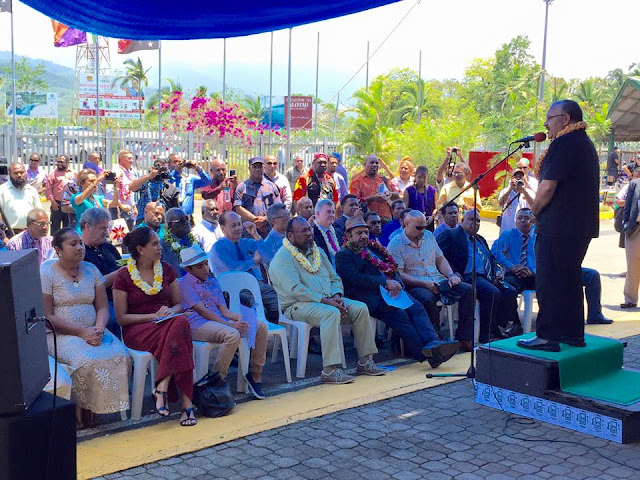 In this post-modern era, the controversial infamous Prime Minister of Papua New Guinea namely Peter O’Neil, has failed to walk the talk. Peter O’Neil has threatened to withdraw the visa on arrival arrangements PNG has with Australia unless visa rights are reciprocated. This in record, broadcasted through radio Australia on the 15th of November 2013, titled “O’Neil threatens to scrap visa on arrival rights for Australians”.
He (PO) unequivocally made the statement on the floor of Parliament and rest of the script is cut and pasted as follows:
“Speaking in parliament, Mr O'Neill said he is disappointed with how long it takes Papua New Guineans to get an Australian visa.
He says he is also upset with reports about inconvenient questions being asked by the Australian High Commission during the application process.
"This visa on arrival business for all Australians will be withdrawn by the following year if we don't get a similar arrangement with them," Mr O'Neill said.
"They all can go and apply for a visa in Australia so that they can come.
"We don't want to inconvenience the travelling public, but on principle sometimes these decisions have to be taken."
In May Mr O'Neill told then-prime minister Julia Gillard that easier visa access for his citizens will go a long way in improving relations between PNG and Australia”.
For the purposes of verification, above article is derived from the following website: http://asopa.typepad.com/…/oneill-threatens-to-scrap-visa-o…
On a Tuesday, 21st January 2014, as reported, Australian Foreign Minister (Julie Bishop) was to seek further clarification on the status of revocation of visa on arrival. To read the detail, click at: http://www.theguardian.com/…/papua-new-guinea-revokes-visas…
The Australian Foreign Minister Julie Bishop checked with PNG Government, and Peter O’Neil without considering the economic ramifications the ban will have on the tourism sector, bold as he was but blatantly confirmed his position on the ban, though yet to be ratified.
From media fraternity, when they asked Papua New Guinea Tourism Promotion Authority (PNGTPA) on the likelihood of economic implication of such suicidal uneconomic decision, spokesperson (Collin Taimbari) for PNGTPA, in reply said, “DEFINITELY” and declined to comment further.
Arrogant Peter O’Neil, in his audacious nature, further asserted that he would withdraw visa on arrival business for all Australians, this he told ABC but little did he know the damage he was inflicting on PNG economy. It didn’t hurt Australia corporately but caused upset and disappointed many Australians on a personal level. Read more, click at: http://www.sbs.com.au/…/21/aussies-face-png-visa-arrival-ban.
Without the thinking cap, making foolish dump decisions basing on emotion and hate, not being smart somewhat contributed tangibly to the country’s economic downturn.
Contrary to his outburst, Post Courier, Tuesday, November 17, 2015 (http://www.postcourier.com.pg) reported, visa on arrival to boost tourism. Why Peter O’Neil making complete “U” turn, a backflip in his stance? PO regards himself a person of steel, can’t be easily swayed or deterred. PO all time boasts about his government being the government of infrastructure in record time. PO is a political coward, isn’t he? PO can’t walk the talk.
This isn’t a show of brilliancy or demonstration of smartness. Calculatedly orchestrated in a bid to save face from humiliating economic debacle and ignominious political fiasco.
Because PNC under late Bill Skate in record time has led this country into near economic recession and under the same political banner, under PO’s leadership, it replicated Bill Skate era and decision on up-lifting the visa on arrival for Australians, is it a kneejerk measure to revive the downward spiral of economy? Has PO now woken up to his senses and finally realise how stupid he was including his retinue of so called economic advisers?
Politically, economically and in other aspects, Peter O’Neil needs to know his government won’t and never will outdo Australia in any facets, be it economically, politically, sports, etc.
Peter O’Neil must swallow his pride, concede and accept the fact that country lacks and lags in many fronts. Though PNG, an island of gold, floating in the sea of oil and burning in the flame of gas, won’t and never will gain economic independence.
Unless the culture of receiving kickbacks, setting businesses left-right-centre putting others out of business, appointment of political cronyism, silencing the voice (student movement & unions) of the silent majority with offer of bribes and other corrupt wheels and deals, nothing will change for the better.
Charles Abel and Peter O’Neil’s knee-jerk action is but a little drop in the bucket.
AUSTRALIAN VISA Corrupt ill Peter O'Neill PNGTA VISA