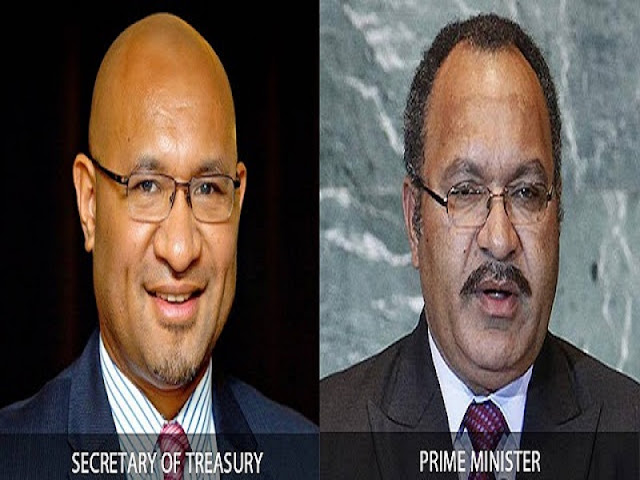 Another independent international assessment of Papua New Guinea’s financial management has contradicted the spin and deception by Prime Minister Peter O’Neill, Treasury Secretary Daire Vele and the mainstream media led by the Post-Courier.

The report, Poor Financial Management in PNG: Can It Be Turned Around? Is available here:
http://devpolicy.org/pngs-financial-management-can-it-be-turned-around-20160112/ . It was written by PFMConnect, a respected international consultancy specialising in developing country financial
management.

The report slams the O’Neill Government’s financial management and reinforces the criticism of other independent international observers who have exposed the corruption, incompetence and waste that is rife under Peter O’Neill and Daire Vele.

Papua New Guinea ranks 21st out of the 24 assessments of Public Financial Management conducted by the IMF last year, according to the report.

Most alarming is the fact that under Mr O’Neill and Mr Vele, public financial management is almost twice as bad as it was previously.

In the last assessment, in 2009, 32 per cent of Performance Indicators were in the highest categories of A and B.

“The fall … suggests a major deterioration in public financial management in PNG,” the report says.
“Most of the 2015 (IMF) report contains a damning indictment of financial administration: control over budget execution is weak; there are high levels of variance between budget and expenditure;
expenditure control is weak; project implementation is weak; budgets contain insufficient analytical
detail; many bank reconciliations are not carried out in a timely manner and contain significant
unresolved items; the coverage and classification of in-year data does not allow comparison with
original approved budgets; many state-owned enterprises receive very poor audit reports; there is no
overall PFM reform strategy; and much else besides. "Clearly, financial management in PNG is in a parlous state.”

In other words, corruption, waste and mismanagement are out of control. The defence of public financial management by Mr O’Neill and Mr Vele and the Post-Courier are nothing but lies.

Mr O’Neill and Mr Vele are actually at the forefront of corruption, waste and mismanagement.
The report indicates that secrecy is a key factor in the O’Neill Government’s promotion of corruption to benefit its Members of Parliament and its private-sector cronies.

The report notes in particular the failure to have SOEs properly audited – it is common knowledge that they have become personal piggy banks for corrupt politicians and corrupt contractors and advisers. This has occurred because of the deliberate lack of transparency and accountability of SOEs and the refusal of the Auditor-General and other authorities to act against blatant corruption by SOE directors and management.

The policy of secrecy across the O’Neill Government – preventing the citizens of Papua New Guinea
from knowing the true state of affairs in the economy and government finances - is the real reason
behind the recent decision to expel Australian advisers, especially from departments such as Finance,
Planning and Treasury.

O'Neill feels threatened by ministers, public servants and advisors who push for real reform, which is
why they are resisted, silenced and sidelined. He fears exposure of his own corruption.

If the government is serious about improving financial management then it needs to welcome feedback, embrace a discussion of the issues, instead of attacking individuals and diverting attention.
It results in issues such as the theft of K2.5 billion in Government contributions to Nambawan Super,
which both the Government and Nambawan Super tried to keep secret.
It results in an ever-increasing financial burden on ordinary Papua New Guineans – the latest is the rise in MVIL’s registration and insurance fees, which have almost doubled since last year and which the Government also tried to keep secret.

O'Neill does not want transparency and accountability, because that would reveal the depth of his
deception.

As PNGBlogs has previously reported, more than K3 billion a year is likely being stolen and wasted by O’Neill, his politicians, and their public service and private sector cronies.

Over the five-year life of the O’Neill regime, they have likely stolen or wasted more than K15 billion.
These estimates are based on figures made public by the Prime Minister himself, Works Minister
Francis Awesa and the head of Task Force Sweep, Sam Koim, in the last few years.

The report calls for an open assessment of the challenges in reforming public financial management
and the causes of the failures identified over many years.

However there appears to be no avenue open for reform – the Government led by the Prime Minister
and Treasury Secretary have no interest in it. Nor does the private sector, which has increasingly
flourished as corruption has worsened.