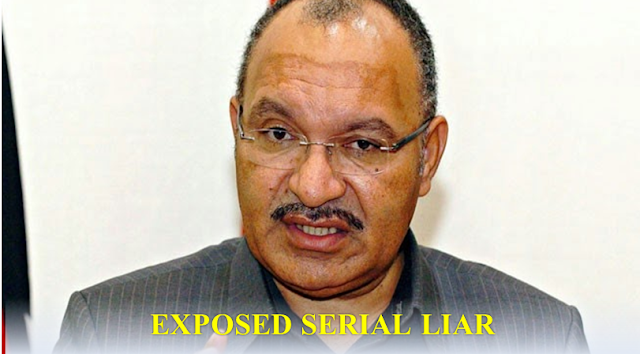 
Many have described our Prime Minister, right honourable Peter O’Neill as “O’Liar”, “Pathological liar”, “serial Liar”, etc and I refused to be one. But it has come to a time when I have to sit down and analyze whether those words hold true. The following is what I managed to dig up from the internet.
On 9th August 2013 at 5:36pm, Peter O’Neill has the following conversation with Jonny Blades of Radio New Zealand:
“JOHNNY BLADES: Some of the people in your own cabinet might be looked at. You're happy with that? Anyone can be investigated?

PETER O'NEILL: I've told cabinet from day one and members of parliament from day one, no-one is above the law, including the prime minister. No-one is above the law. Where they're answerable for their actions they must be held accountable. And they all know the rules that are there. We all know the laws that are there, and I think it's important that the right message is given to our leaders and our people. This is a massive problem for us. If we do not tackle it now it'll become even worse into the future. So that is why we are making sure we address it through this independent commission.”
See the full interview on: http://www.radionz.co.nz/international/programmes/datelinepacific/audio/2564981/ng's-pm-says-govt-is-converting-resource-wealth
When ABC Four Corners interviewed Mr O’Neill about NPF and Parakagate and here is his response: “Listen, I’ve always stated very clearly that if there is new evidence out there that suggests that I have acted corruptly in my dealings with anybody, I’m answerable to the same laws like anyone else.” See the interview on: http://www.abc.net.au/4corners/stories/2013/09/23/3852506.htm
In the Parakagate, O’Neill tells ABC Four Corners that the letter bearing his signature was not his because “I don’t write to Secretaries. I write to Ministers.”
In the subsequent payment of K50 million for the second hand PNG Power generators from Israel, O’Neill admits writing to Secretary for Treasury Daire Vele directly (without Minister Ben Micah (State Owned Enterprise) and Patrick Pruaitch (Minister Treasury) knowledge), directing payment.
See this link: https://www.youtube.com/watch?v=Q7PqdbBuniM
When Peter O’Neill was questioned by Hon Belden Namah in Parliament of the alleged letter that he wrote authorising payment of Paraka bills, Mr O’Neill denied authorship of the letter. He claimed it was forged. However, in a subsequent letter dated 15th May 2013 he confirms the previous letter hence undermines his forgery claims. See http://www.abc.net.au/news/2014-07-10/second-letter-undermines-png-prime-ministers-forgery-claims/5586038
Besides the existence of the second letter, there was a forensic examination of O’neill’s original letter. The forensic examination confirmed that the signature on that letter was Mr O’Neill’s. See http://www.abc.net.au/news/2014-06-17/fresh-evidence-involving-png-pml/5528244
Paul Tiensten was imprisoned for a mere footnote directing payment of K10 million and there was no evidence linking how Tiensten benefited from the transaction. A mere directive was sufficient to lend him to 9 years imprisonment with hard labour. Peter O’Neill had directed in a letter under his hand for the payment of more than K71.8 million, yet he had the audacity to make the following statements in Australia at the Press Club recently (3/3/16):
“Mr O'Neill said that the legal case was taking its course.
"Show me where I have received one toea (PNG coin) or one Kina (cash currency) and I will resign tomorrow," he told the National Press Club in Canberra on Thursday.
See this link for full story: http://www.theguardian.com/australia-news/2016/mar/03/papua-new-guinea-lacks-resources-to-resettle-all-manus-island-refugees-warns-pm
So one wonders, how can the court (the criminal court process), establish O’Neill’s innocence when the very process is being stifled by O’Neill through the civil courts, filing all manner of applications? How can the legal process take its course when he is putting all manner of road blocks? How can that process take its course when it hasn’t even started yet due to his interference? Not to mention that he doesn’t have to benefit personally to be guilty of the crime according to the Tiensten case. Just a directive is sufficient.
Peter O’Neill thinks that he is brilliant in wearing his disguise but is not realising that he is weaving a web of lies that entangles himself and his leadership. How does it feel like having a prime minister who is the most untrusted and habitually lies to the whole world? Does he ever realise that his lies are retrievable and can be tested against each other? Probably the mountain of his lies have reached beyond his height that he cannot reach over and see what transpired yesterday.
There is something called the virtual world where your prior inconsistent statements are stored and accessible by anyone around the world. Peter O’Neill is still thinking that he is in Pangia stealing kaukau and the whole world doesn’t know.
Next time when you go overseas and address international media, please have some decency and responsibility.
ABC conman crook Liar NPF O'NEILL Peter O'Neill radio new zealand serial liar steal thief 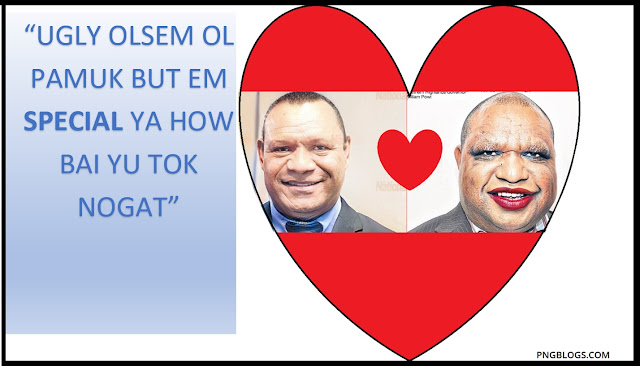