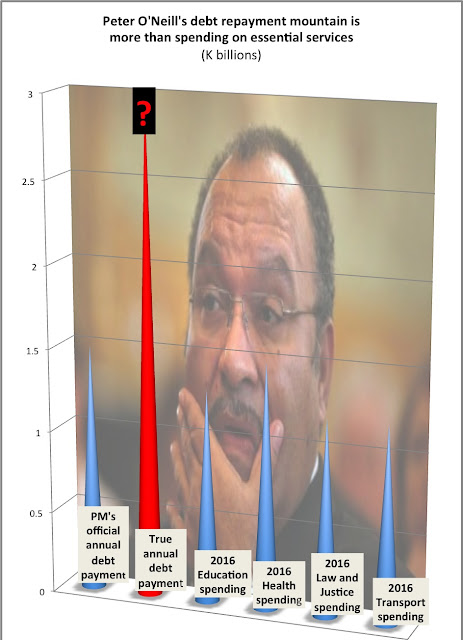 No believes what comes out of Prime Minister Peter O’Neill’s mouth any more.

New research has discovered that everything he said on the National Public Debt crisis of Papua New Guinea are all lies.

It can be easily demonstrated that the national debt is much higher than the false numbers given by PM O’Neill.

That brings bad news for the struggling people of Papua New Guinea, like Public Servants who are not being paid because the nation is bankrupt.

Spending on essential services such as health, education, law and order, and transport will have to be cut even more.

Mr O’Neill and his conmen are still getting fat on all the money they have stolen and sent to Australia, but the quality of life for the all other citizens is falling faster and faster.

HERE IS WHAT IS REALLY HAPPENING

For 2015 the annual repayment of official debt of K17.8 billion was K1.5 billion, it says in the O’Neill regime’s own Budget papers.

Grade 10 arithmetic tells us that is an interest rate of about 8.5%.

But Mr O’Neill has hidden large amounts of his debt from the people. THE REAL NATIONAL DEBT IS K27 billion.

This number has been confirmed by independent international reports, including International Monetary Fund’s latest report.

Repayments on PETER O’NEILL’S REAL DEBT will therefore be K2.3 billion a year at least.

But the repayments are likely to go as high as K3 billion because the Prime Minister is still looking about to borrow even more money to pay PNC’s election campaign.

All the cash bribes, slush funds, payoffs to EC officials, police, defence force and all his tricks like phony contracts to his cronies.

He is still looking for the sovereign bond issue of $US1 billion, and K10 billion from ExIm Bank of China.

Now there is news from Australia that he has refinanced the UBS-Oil Search share con deal.
This will add to PNG National Public Debt because penalty interest rates have to be paid plus a lump sum penalty.

Debt repayment under the O’Neill regime is going to be another crisis of suffering for PNG.

Repayment of debt is now higher than spending in the 2016 Budget on essential services.

O’Neill is giving more money to lenders, mostly foreign, than he is spending on the health and welfare of his own people.

THIS IS THE REAL REASON WHY PM O’NEILL CANNOT PAY PUBLIC SERVANTS, WHY THERE IS NO MONEY TO BUY MEDICINE FOR HOSPITALS, WHY SCHOOLS ARE CLOSING, WHY THOUSANDS OF VILLAGE PEOPLE ARE STARVING FROM EL NINO, DOCTORS AND NURSES, POLICE AND SOLDERS AND TEACHERS LIVING LIKE PIGS, THE CON FREE EDUCATION AND FREE HEALTH CARE POLICIES NOT BEING FUNDED AND MANY OTHER DISASTERS FROM CASH FLOW CRISIS.