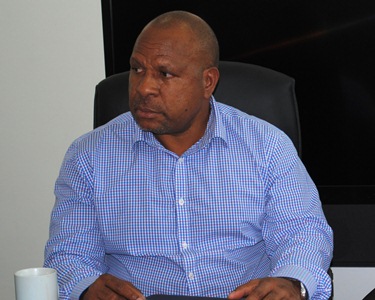 Isaac Lupari has recently become the Chairman of Public Debt Committee,(PDC), their core function is to manage the cashflow of the country. PDC is made up of Treasury Management(Chairman), Finance Management and Bank of PNG.

PM's Dept is not suppose to interfere with the operation of Treasury management. The responsibilities to raise revenue and expenditure lies with the treasury IRC, Customs and Finance according to the constitutional functions of these institutions.

Never in the history of this country a Chief Secretary becomes the Chairman and manipulate the cash flow management of the country, that means, Isaac Lupari is a superfluous who is hell bent on destroying  the core functions of these constitutional institutions and politically compromise the prudential fiscal management and governance of established government institutions.

Does this show that the Governor of the Central Bank, Secretaries for Treasury and Finance and their Management team incompetent? If so they should all resign and Hand over all their functions and responsibilities to Isaac Lupari and the PM's department.

When Isaac Lupari himself never managed any of Finance and Treasury Departments or if he was appointed, never lived long i.e. More than a year.. Also rumor has it that his Company was paid K15 million from a cash advance account by Ken Ngangan in early 2014, yet unshamingly interferes with the operation and function of this constitutional offices.

No wonder thieves and like minded thieves still tripping on the public purse for their own interests.

LUPARI HAS A TAINTED HISTORY

Former Ambassador to the European Union, now Chief Secretary and Consultant to the Prime Minister, Isaac Lupari stole K3.7 million from the people of PNG through false claims for breach of contract according to the findings of the Commission of Inquiry into the Finance Department.

The false claims were drafted and submitted by Guguna Garo, of Paul Paraka lawyers, and were illegally settled by the then Solicitor General, Zachary Gelu. In addition to the K3.7 million, a further K800,000 was paid to Paul Paraka lawyers from public funds for their role in facilitating the fraud.

The Commission of Inquiry has recommended Isaac Lupari, Zacchary Gelu and Guguna Garo all be investigated by the police with a view to prosecution for fraud and conspiracy.

From 1997 through to 2009, Isaac Lupari was employed by the State in a series of senior positions including Secretary Finance, Secretary Defence, Secretary Works, Special Advisor to the Prime Minister, Michael Somare, Secretary Transport, Ambassador to the European Union and Chief Secretary. In these positions Lupari was handsomely rewarded, receiving, for example K1,294,133 in the four-and-a-half year period between September 1997 and April 2002

But being paid over K270,000 a year wasn’t enough it seems because in December 2001 Lupari sued the State for breach of four separate employment contracts. Lupari claimed he had successively been unlawfully terminated as Secretary Finance, Defence, Personnel Management and Transport and was entitled to claim the balance of all pay and entitlements for the unexpired period of all four contracts. These claims were fraudulent as Mr. Lupari never suffered any loss of pay and entitlements and was employed by the State for the whole time that he claimed for and beyond.

However, Lupari’s initial legal claims were never pursued as when Somare was elected PM in 2002, Lupari agreed to withdraw them as part of the deal that saw him appointed as Ambassador to the EU. Lupari though did not honour that agreement and five months later, in January 2003, Paul Paraka lawyers resubmitted the four claims on behalf of their client.

Less than two months after the four claims were filed with the Court they were approved for settlement by Solicitor General Zachary Gelu. Gelu agreed to settle the claims despite clear instructions from the Department of Personnel Management that the claims were unlawful, without merit and should be vigorously defended.

Gelu personally signed the Deed of Settlement awarding Lupari K3,703,461.31 and at the same time approved the payment to Paul Paraka lawyers of an additional K800,000 for their costs (a hugely inflated figure given the claims had only been issued two months earlier).

Lupari’s illegal claims were drafted and filed by Guguna Garo of Paraka lawyers. The Commission found that Mr Garo must have known that at least one of the claims he submitted was baseless and that in all four cases he would have known Mr Lupari had suffered no loss. The Commission found Mr Garu knowingly misled the court from the very start.
Bank of PNG BPNG crook Isaac Lupari Paraka Lawyers PDC Peter O'Neill tREASURY