UNITECH SRC IS DRAGGING THEIR HEALS, WHY? 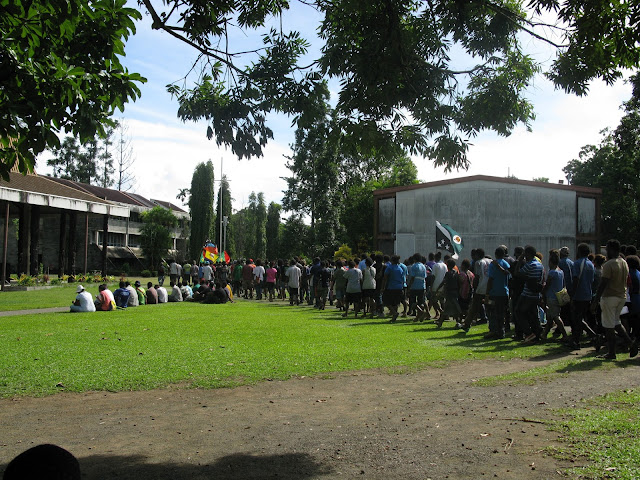 Here at Unitech Lae, the SRC is trying to twist the truth around and blaming certain groups of students for rebelling against the SRC and not following legal procedures.

Let it be made clear to the world that the executive members of Unitech SRC have forced some students to take matters into their own hands. They did so because the SRC as a whole is showing complete disorganization and dragging their feet in organizing students. They are not moving forward clearly to join hands with UPNG to force the PM to step aside, be arrested and interviewed, and allow justice to take its course with no further interference on his part.

The rebel students refuse to let the SRC trick us all and either stop or slow down the process to make Unitech once again a leading force to educate all people of PNG as to our future if we allow Peter O’Neill to continue blocking all attempts to prevent his arrest and investigation for numerous corruptions.

The SRC should not even propose a referendum if SRC leaders hearts are not settled and they feel uneasy with a boycott.  Why waste time if the SRC isn’t prepared to lead that boycott?

The only reason why there is disunity amongst Unitech students is that the SRC leadership is not leading strongly and clearly in the direction of pressuring this PM to step down.   Peter O’Neill has lied so much and changed his song so many times that the only way to guarantee compliance is for him to hand over power to a neutral PM.

Organise yourself, SRC executives!!!!  Stop being 5 steps behind the passion of students who care the most about our country.   Work with these more passionate souls instead of blaming them for doing what they can to speed you up from your current snail movement.

The eyes of the world will be watching Unitech SRC, especially all actions of the SRC president.   Make false moves to secretly side with the PM and your actions will be reported to the world.   Remember what happened to the last SRC president.

Richard Mabiria was correctly shamed to the world last year by PNGBlogs for financial mismanagement.  He was not even given his degree paper at graduation.  He will never get his degree paper until he comes up with what happened to tens of thousands of kina in missing SRC money from last year.

We are sick of these kinds of self serving SRC executives!!

We true nationalist students at Unitech who hate corruption want an SRC leader who shows the nation what we can do in the name of justice. We defeated the government in 2014 because we fought for justice and whats right.   Do not be obstructionists, current SRC.   Embrace the radicals speaking out for justice and let them give the SRC leadership the energy you so far have seemed to lack.

Instead of declaring what other students do illegal because they did not get SRC permission, start giving permission to allow the broadest participation by unitech students and expression of opinions.  The role of SRC should not be to shut up and kick aside those who want the leadership to take more action!!
Peter O'Neill PNG Richard Mabiria SRC UNITECH