SHP STUDENTS CALL FOR AWESA TO STEP DOWN 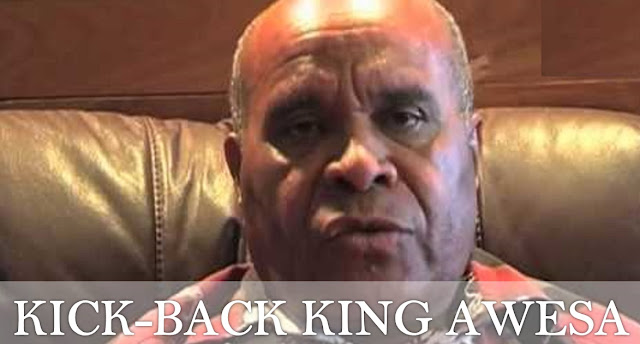 by NAIK MALCOLM
I as an Imbongu Citizen Would like to call for Mr Francis Awesa to Step Down.
This is to the Works and Implementation Minister Mr Awesa, How much lives have you saved from the tribal fights in Southern Highlands Province. How much securities have you provide for those who suffered in the name of tribal fight.
Mr Awesa has saved no live in the most tribal fights in Southern Highlands Province. Yet, Mr Awesa is asking the VC to save the lives of the students during the time of trouble while the poor VC and the Unitech administration trying their very best to protect the students.
And Mr Awesa should be blamed for the death of the student because Mr Awesa as an Imbongu MP, he did not take responsibility to warn his student to return to class when the tension is very high.
Mr Awesa even failed to send police to protect the Imbongu students when he knew that his students are at risk in the campus. Yes, Mr Awesa and all the Member of the parliament and the Unitech administration including everyone concerned should make sure security is provided in the campus to protect the lives of the students. But Mr Awesa should be the first one to provide secutiry for the Imbonggue student in the campus anyone but Mr Awesa failed to do that and therefore he should be blamed.
Dear Mr Awesa, the VC did not sleep with yourr wife so never single out the VC by saying that the VC is to be blamed for the death of the student. It is you, you should blame yourself. Do you know how much the VC sacrificed for your students and for your country? Do you know the quality of the education the students at Unitech begin to get when the current VC first came in Unitech.
You taking Albert Schram out of the country mean you killing all the students of Unitech and the student who will come to Unitech in the future.
This also mean that you kill the back bone of the country because you want to take the Good one away and when the bad replace the good one, the bad will proved rubbish to the students. Do not start Unitech Saga again Mr Awesa.
University students are matured. They knew what is good and bad. You cannot control them like kids. They first provide security for themselves and then police and the people concerned can provide additional security. Unitech Administration was try their very best to protect the students but yet Mr Awesa gave them the bad name when he say “Unitech Administration failed to provide the security”.
Mr Awesa, you are the culprit who causes the death of the student. It is you and Peter O'Neill should be blamed for the death of the student.
The poor student was trying to support Mr O'Neill but somehow was killed. So Mr O'Neill should also be blamed for the death of the student. Since Mr Awesa supported Mr O'Neill, Mr Awesa is also to be blamed. Awesa are O'Neill are the source of every problem that caused death.
Secondly, the Unitech SRC President should also be blamed for the death of the poor student because SRC president supports O'Neill & Awesa and did not follow the will of the students who voted him.
Dear Mr Awesa, you knew that O'Neill had betray you and you have in mind that in one day you will over throw Mr O'Neill but you pretend to support O'Neill and blame the innocent people.
So Mr Awesa, who do you support? The one who betrayed you or the relatives or the innocent dead.
You blame the innocent people which shows that you betrayed the relatives to the poor student who died. You betrayed the parent because you protect the trouble make Peter O'Neill.
You pretend to support Mr O'Neill and in your mind you want to pay him back of what he had done to you. And you blame the innocent to cover up.
You will not beat peter O'Neill. You will never, and never and never in your life.  You will still be his slave. He will still take form you. You know what I mean.
Mr O'Neill will still continue to suppress and take from you Mr Awesa and give you the rubbish that you deserve.