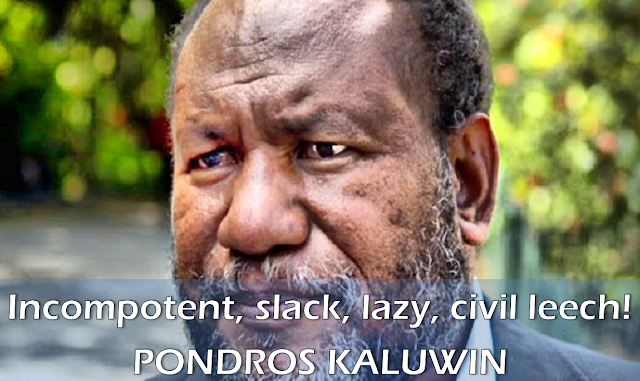 The decision by the five men bench of the Supreme Court concerning the case against the Prime Minister Peter O’Neill in relation to his referral for prosecution on the UBS loan allegations does not come as a surprise to many who have been keenly following this case. This is a situation where the outcome was designed right from the beginning and all fingers point to the Public Prosecutor, Pondros Kaluwin.

Mr Kaluwin is a seasoned prosecutor whose entire career was with the Public Prosecutors Office. He knows the functions and powers of his office very well.

The mistake that compromised PM O’Neill’s case is very rudimentary (basic) and therefore it is beyond believe that a person in the like of Kaluwin could make an innocent mistake or a professional misjudgment on a very important case. Like I said –this was designed.

The Public Prosecutor committed two cardinal yet deliberate sins that deprived the people of Papua New Guinea justice in the case against Peter O’Neill. Firstly, the Public Prosecutor does not involve in the investigation process. He is vested with the prosecutorial powers and his decision concerning the case against PM O’Neill was to decide whether or not to bring proceedings against him by referring the leader to the Chief Justice for a tribunal to be appointed. Instead, he then wrote to the Ombudsman Commission requesting for further evidence. He exceeded his powers by doing that.

As a seasoned prosecutor in the employee of the Public Prosecutors office and now the head of that constitutional office, Mr Kaluwin knew the limits of his powers very well yet deliberately did this, creating a loophole to be capitalized by O’Neill down the line. The ruling by the Supreme Court was the outcome envisaged by Kaluwin. Mr Kaluwin did not need a Supreme Court to spell out his cardinal sins. He knew what was wrong and he did it deliberately to destroy what was otherwise a very strong case by the Ombudsman Commission. The question whether the decision to borrow the UBS loan of K3 billion was approved by Parliament was a very simply question and the answer was obvious. It left no room for O’Neill to escape justice but for Kaluwin’s corrupt collaboration.

Now we know why Mr Kaluwin took an unreasonable lengthy period to make a decision on PM O’Neill’s referral once he had the file from the Ombudsman Commission. Now we know why Powes Parkop, a distant relative was routinely picking up Kaluwin at his office carpark during the period Kaluwin was contemplating his decision.

Mr Kaluwin, a heavy gambler and patron at a number of pokies clubs (car club) in Port Moresby, has designed an escape route for Peter O’Neill.

The case concerning the illegal UBS loan of K3billion is too important for the country to meet such a fate. O’Neill unilaterally facilitated this loan without following all the lawful processes. It is economically unviable and did not benefit PNG by any measure or form. It benefited Oil Search Limited. As of this date, PNG’s value of that investment is less K600million. What a loss!

Papua New Guineans demanded justice in this case, only to be robbed of by the only people like Kaluwin who are placed in the position to protect the peoples’ interest.