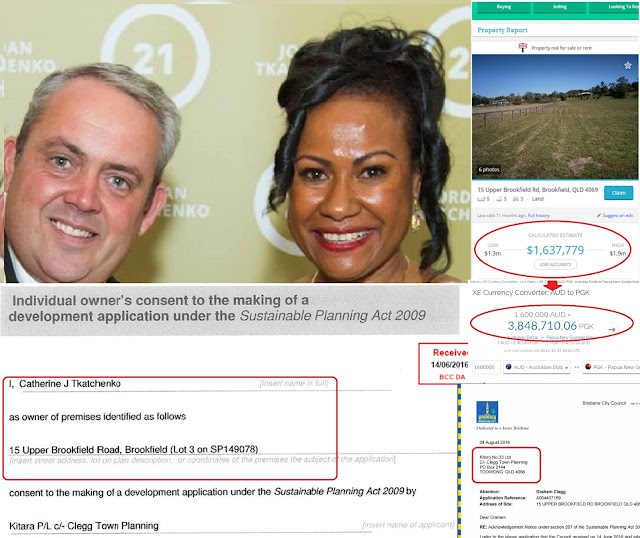 by MICHAEL JOSEPH PASSINGAN
Brookfield in Brisbane is a largely rural suburb consisting primarily of acreage properties. Although there are a small number of farms, the vast majority of property is residential. The newest resident is ex PNG gardener turned businessman now politician and a key figure in Peter O'Neill's government, JUSTIN TKATCHENKO, Mr Tkatchenko through his holding company KITORO No 33 purchased 15 Upper Brookfield Road in Brookfield (34,399 m2) with an estimate market value of $1.6 Million dollars, or K3.8 million Kina for himself and his family using money he stole from PNG through various kickbacks including the over-budgeted Pacific Games building program.

He has never escaped from the limelight and has the tendency to educate native Papua New Guineans that he is Mr "Know it all". Mr TKATCHENKO's disrespect to the country has seen him willing to steal and build an empire which has grown from nowhere to being the "go-to-guy" for the Prime Minister who himself is a crook and thief. What Papua New Guineans are experiencing is a clear case of institutionalize fraud involving men who are custodians of this country, men who have been given the privilege to serve yet continue to steal for their own good. Mr TKATCHENKO is currently seeking a rezoning of the property with the BRISBANE CITY COUNCIL for Dwelling House and Animal Keeping.

This is how dumb Papua New Guineans are electing a foreign national who has vested interests elsewhere, Mr TKATCHENKO is still a director with KITORO No: 33 even when he lied blatantly in Parliament that he has no interest. Property records now with the Brisbane City Council show the property owner is CATHERINE J TKATCHENKO.  Will the Ombudsman Commission investigate this fraudster? we think not? TASK FORCE SWEEP is toothless, crooks and cronies pile up in all the key government institutions and are holding the country to ransom. While the few get to live overseas and spend all their stolen money overseas, we, us you and me we suffer in silence and beg like dogs.

HISTORY OF CORRUPTION
Sports and Special Events Minister Justin Tkatchenko is not a fit and proper person to be an MP, let alone a government Minister, given his history of unanswered fraud allegations.Parliament’s own Accounts Committee and special investigations at the National Capital District have both thrown up detailed allegations of corruption while one criminal prosecution against Tkatchenko was dropped in circumstances questioned by the National Court.In 2010 it was alleged Tkatchenko received over K3 million in payments from the National Capital District through his landscaping companies Kitoro No.33 and PNG Gardner. It is claimed these payments, were authorised by NCDC Governor Powes Parkop in breach of the Public Finance Management Act, the NCDC Act and the Organic Law on the Leadership Code.The payments, which were made for work on the NCDC Mini Park, Water Fountain, Waterslide and Zoo and Animal Farm, were made with no quotations provided and no public tendering process – breaching the fundamental principles of value for money, transparency, effective competition, fair and ethical dealing and efficiency.But the allegations against Tkatchenko go back much further. In 1999 a Special Investigation into Fraud, Corruption and Financial Mismanagement at the National Capital District Commission, done by TSK International, found that Justin Tkatchenko as Acting City Administrator had fraudulently obtained a total of K12,000 through two cheques in the sums of K4,000 and K8,000.The investigation concluded “Mr Tkatchenko had dishonestly applied the monies to his own use”. Although the police did investigate these allegations and criminal charges were laid a Magistrate dismissed the case before it got to trial – a decision that was later heavily criticized in the National Court. Indeed when Tkatchenko then sued the police alleging malicious prosecution and false imprisonment Justice Salika not only dismissed the case brought by Tkatchenko he described it as “frivolous and vexatious”. Salika found there was plenty of evidence to justify the charges against Tkatchenko and that it “is a wonder to this Court” why the Magistrate dismissed the case.In 2003 the Parliamentary Accounts Committee was asked by Parliament to conduct an investigation into alleged corruption in the Parliamentary Service. The Committee submitted its report in September 2003 after summonsing witnesses and hearing evidence given on oath.The PAC investigation found Justin Tkatchenko company Kitoro No.33 was awarded a K1.5 million contract to maintain parliamentary gardens, in breach of procurement procedure. The Kitoro tender was received 3 months AFTER the closing date.The tender submitted was only for twelve months but a three year contract was awarded. The original contract amount of K490,000 was K190,000 above the limit imposed by the Public Finance Management Act. The lowest bid for the project tender was just K12,000 per year. Kitoro was awarded contract totaling K837,738 that did not go to public tender.The PAC recommended the contracts with Kitoro No.33 be terminated immediately and the officers responsible for the tendering, awarding and executing of the contract face ‘appropriate action’.While Tkatchenko has never been found guilty of fraud he has been implicated in fraud in at least three separate investigations stretching back over a 12-year period and one set of criminal charges he has faced were dismissed in circumstances a senior judge regarded as suspicious and unjustified.If people like Tkatchenko want to hold public office then we need the allegations against to be heard in a proper public trial first – and not dismissed at the committal stage in suspicious circumstances, if they ever even get that far. If they are innocent what do these people have to hide and until they face due process they are not fit and proper persons to hold public office.The case of Tkatchenko raises a number of serious and wider questions, including: