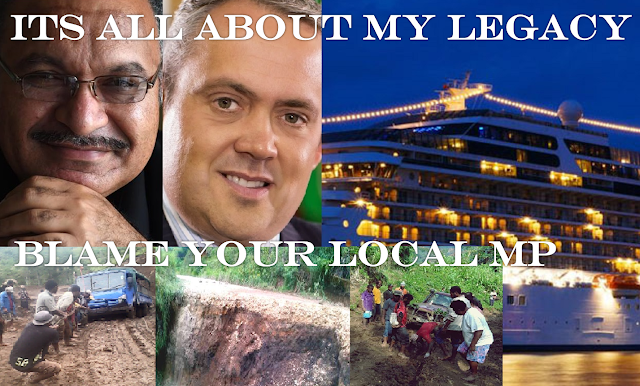 by Dr Anthony Deklin
PRIME MINISTER O'NEILL SHOULD STOP THIS RIDICULOUS INTERNATIONAL POLITICAL GRANDSTANDING AND REDIRECT THE LIMITED PUBLIC MONEY PNG HAS TOWARDS ALLEVIATING POVERTY AND RAISE THE LIVING STANDARD OF THE MAJORITY OF PAPUA NEW GUINEANS LIVING IN THE VILLAGE.
When I saw in yesterday's Edition of the Post Courier (Monday 24 October 2016) a report that PNG will be hiring three cruise liners and parking them at the Fairfax Harbour in Port Moresby to accommodate the APEC guests in November 2018, I had to come out and express this feeling, which had been building up in me for some time.
My question to the Prime Minister is this: Why go out and make a fool of not so much yourself as of your country in the eyes of the world by inviting world political leaders and their entourage of more than 6,000 people to come to a world event when you know very well that you don't have the hotel accommodation capacity to host them? This simply does not make sense. It is embarrassing, to say the least.
I am not saying that PNG shouldn't host the APEC . PNG is a member of the regional economic grouping and so, it has a responsibility to host it at some point. But not this time. It's a question of timing and affordability. If you are going to host such an august gathering, make sure as a matter of common sense that you are fully prepared before you issue the formal invitation to your guests, especially some of the most powerful leaders of the world, such as the President of the US. I just hope they don't put the US President on a cruise liner at Fairfax Harbour. She/he would be more comfortable in the Air Force 1 parked at Jackson's than in a small room on a cruise liner. Fancy the embarrassment you and I as Papua New Guineans, would suffer if the headlines of the world media read, "PNG puts up the US President on a cruise liner because it does not have a hotel room for her."
You see, the Prime Minister has been up there on the international stage doing all this grandstanding to try and showcase PNG as a rich nation, when it is not as a matter of fact. He has been throwing Kina here and Kina there in millions and billions, trying to sell what is more an illusion than a reality. Our national budget in a given year does not exceed even K20billion. If you think this is big money, how come, Provinces, Districts and Local-level Governments are still waiting for the full payment of their respective Services Improvement Programes fundings promised them for this year, let alone for the previous four years? And why are we still spending K500million annually importing rice when this crop should have been a successful industry in the country by now?
If you think our hosting of APEC is going to improve the national economy, you should think again because the millions, if not billions, of Kina that are going to be spent on those three cruise liners alone are not going to stay in the country to improve the economy. That much is obvious.
It's alright for the US President to indulge in grandstanding on the international stage because with the world's biggest national budget of some US$6 trillion,US can afford it. But it's a bit embarrassing for a country with a national budget that is just peanuts to try and emulate that kind of political act on the international stage.
Look at what is left behind by the billions PNG had thrown at the recent South Pacific Games. It has left a big white elephant sports stadium at Waigani, which is hardly used half of the time. Fijians were given a free handout of some K23 million to help them hold successful national elections recently only to have them turn around and bite the hand that fed them by refusing to allow our corn beef and biscuits into their market. The other day the press reported that Tongans have been waiting for Minister Justin Tkatchenko to turn up and hand over the cheque he promised them at the last South Pacific Games in PNG so that they can proceed to get the stadium at Nukualofa done up in time for the next South Pacific Games. So far they haven't heard from him. The Prime Minister has also given handouts to other Pacific countries.
I really hope and pray the bureaucratic advisers in Waigani nail down the next Prime Minister to the domestic scene, and get him or her to stay at home to concentrate our limited public resources PNG has on improving the living standard of our village majority instead of prancing around the globe like a jojo.
A bit of humility Mr Prime Minister will save the country some badly needed money and in the process, from some embarrassment, too.