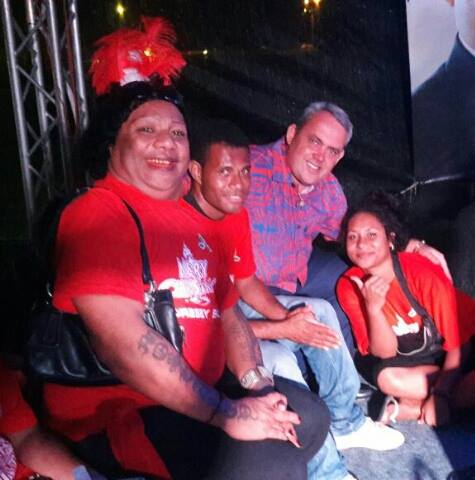 THE STATEMENT THAT HE IS A "FAMOUS HOMOSEXUAL MP".

When the PNG Blogs posting came out on 19th December seemingly connecting Tkatchenko with a Malaysian woman who had overstayed her visa, it included what potentially could have been a much much more slanderous, libelous and defamatory implication - that Justin Tkatchenko was also being referred to on the posting as a "famous homosexual MP". If there was anything on that PNG Blogs posting that could damage an MPs reputation in the kind of cultural environment that operates in PNG, it would be the declaration that he or she was a homosexual. If there was one false allegation on the PNG Blogs posting that would infuriate Justin Tkatchenko, it would be a false declaration that he was a "famous homosexual MP". There would be no possibility of overlooking that statement by Tkatchenko.

There are few countries in the world today where anti-gay sentiments are higher than in PNG, although anthropologists found ritual gay behaviour to occur in many traditional PNG societies. Thus, PNG is one of the places where any politician falsely accused of being a "famous homosexual MP" would rise up and come down hard legally on whoever labeled them as such.

Justin Tkatchenko's letter of complaint to the NCDC/Central Police Commissioner the following day laid out exactly what he found to be slanderous, libelous and defamatory about the PNG Blogs article. He had but a single complaint: That the PNG Blogs posting was falsely implying that he (Tkatchenko) was connected with the Malaysian woman arrested with sex toys, sex enhancement pills and drugs".

The implication thus becomes that Justin Tkatchenko accepted that the statement implying that he was a "famous homosexual MP" was not slanderous, libel, or defamatory. That would be most commonly interpreted as being an acceptance that the statement is true, even though in actual fact, one would more accurately describe him as a likely bisexual rather than strict homosexual person. Many politicians elsewhere in the world have been caught having affairs while on the surface, happily married or in a long term heterosexual relationship (http://www.huffingtonpost.com/…/politicans-gay-rumor_n_4549…). This is all about preferences, not anatomical abilities.

We already got some messages from gay people on the social media who are keeping tabs on the Tkatchenko-PNG Blogs drama. Niugini Outlook published a legal advisor's reading of the whole affair yesterday and that is what has created the most reaction. One feedback we got was that Tkatchenko, through his words, has transitioned "softly but determinantly" to taking the crown of Papua New Guinea's first admitted gay Member of Parliament. It appears that for gay people throughout PNG, this is an historic first and rallying point.

A second comment gave the opinion that NCDC with its rapid transitioning away from traditional melanesian society to a more modern urban one, is probably the only place in PNG that a known gay MP could serve from. Tkatchenko has been gay friendly in the past, good chums with openly gay PNG performer Moses Tau and mixing well with the Hanuabada gay community. Moresby is the centre of the openly gay PNG community and Justin Tkatchenko now becomes the unofficial big man of that community.

With this indirect admission that the "famous homosexual MP" label, we wonder if the old sodomy charge will rear its ugly head again (see https://thepngblogs.blogspot.com/2015/06/blog-post.html). Possibly the cloud of that incident, along with any other stories of gay relationships that have not seen the light of day but easily could be revealed if Tkatchenko were dare to lie and complain that the "homosexual MP" label was libellous, is what made him decide NOT to include that allegation in his criminal complaint letter to Garry Baki.

Justin Tkatchenko's criminal complaint letter to police revealed much more than he probably wanted. The letter was posted onto the PNG Blogs facebook site by one "Sonny Sosis Siamoli". Wonder how it came to be in his possession? 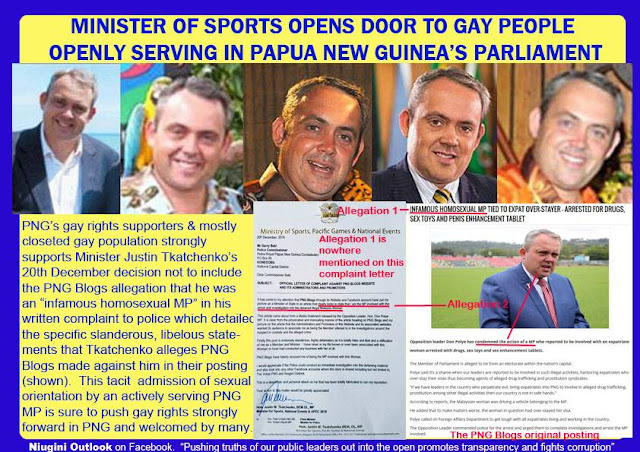