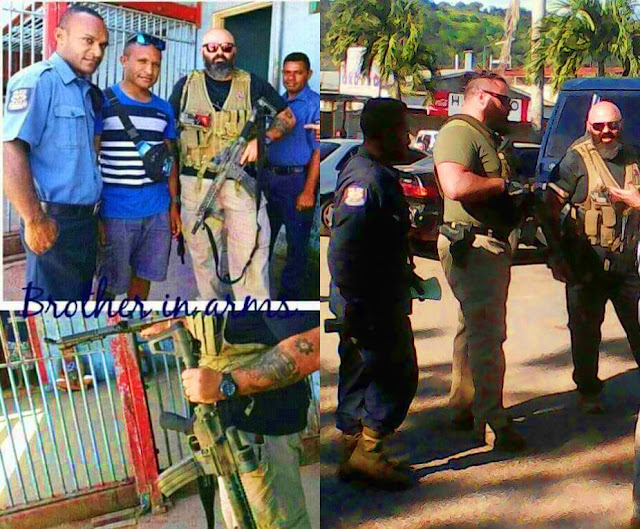 PNG BLOGS
First hand sources have confirmed to PNG Blogs that the sighting of armed expatriate men in Port Moresby are not official US representatives and furthermore the United States Embassy disavows any knowledge of them. They do not have anything to do with the security preparations for the APEC Summit scheduled for next year.

PNGBLOGS reported on the makeup of this private security operations last year:

Prime Minister Peter O’Neill, his personal adviser Dr Jakob Weiss, Chief Secretary Isaac Lupari and Police Commissioner Gari Baki are involved in a secret plot with LR Group of Israel to create a private intelligence agency and secret paramilitary spy force in Papua Guinea.The four have already handed over some of the nation’s most secret intelligence information to LR Group, which is headed in Papua New Guinea by Weiss’s son Ilan.This includes top-secret internal National Intelligence Organization documents and the methodology whereby all PNG security intelligence operations cooperate and coordinate activities and information.These organisations include NIO, the Defence Force, the Royal Papua New Guinea Constabulary, Customs, and National Fisheries.The infiltration of the NIO by LR Group means that all of PNG’s security intelligence networks have been compromised.Oversight and control of the network is now in the hands of LR Group, reporting directly to the Prime Minister.PNG Blogs knows that the Prime Minister’s secret plan has been implemented at least in part, but no information is available as to the extent of implementation.
Some LR Group non-commercial operatives are known to be in Papua New Guinea, and others operate out of a safe house owned by Ilan Weiss in the Sydney suburb of Mossman.PNG Blogs has been told that the Prime Minister’s plan, developed in 2013, was kept secret from NEC and Parliament.One senior O’Neill Government politician told PNG Blogs: “No self-respecting NEC member or MP would ever agree to such a sell-out of national security.“This is tantamount to betrayal of the nation.”The plan is being implemented by an LR Group associate company, Dignia Systems of Israel.

Gary Baki and the Royal Papua New Guinea Constabulary should come out and explain the role these arm men play with the Police Force.

Another source have confirmed to PNG BLOGS that these men are private security contractors engaged by the RPNGC the purpose being they are here to help the police generally, not just for elections or APEC, and are working closely with the police from an educational and training perspective, side by side in the streets not just from a classroom or in the distance to better train and equip the RPNGC to handle current and potential situations, including treating all people appropriately (ie no bribes, profiling or intimidation).

Whoever brought them to PNG must explain their reasons to the public. PNG is about to go to the polls and their presence is highly suspicious as of this moment. Displaying firearms openly in public is illegal and whoever these white men are, the Prime Minister and the Police Commissioner must explain their presence. Who authorised this group to be on the streets of Port Moresby fully armed? And who is paying for this? Is it from the K400 million budgeted for the EC and election security.
EC ELECTION 2017. ISAAC LUPARI Gary Baki LR O'NEILL PNG BLOGS Prime Minister