WITH EMBASSIES AROUND THE WORLD BEING CLOSED, PNG IS ON THE VERGE OF INTERNATIONAL HUMILIATION 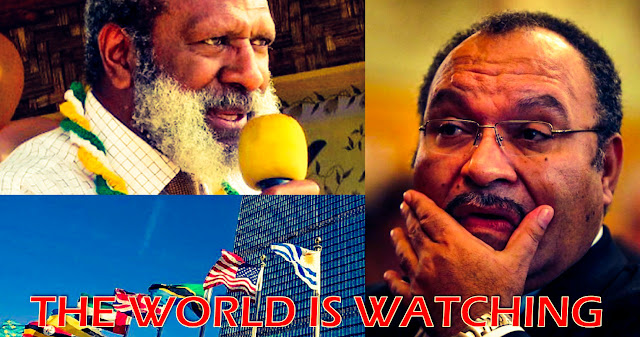 It is with great sadness and disappointment that we learned of the unfortunate recent court decision in Washington DC to lock out PNG. Embassy staff following three months of arrears in rental payments.

The Parliamentary Leader and Member for Sinasina Yongomugl Mr Kerenga Kua said, "The O'Neill Government has spent a fortune during the campaign period telling Papua New Guinea, in a series of glossy advertisements, about how it has put PNG on the world stage. Hosting regional and global events has given us some recognition, but at the cost of so many other high priority areas like health and education.
"Sadly, it is that very world stage that will witness us shame ourselves as we close foreign mission after foreign mission. So far this year we have failed to pay UN fees calling the failure an administrative glitch to avoid further humiliation.
"High Commission and Embassy staff in Singapore, Beijing and Washington has had to go through long periods without pay. The situation became so bad that a particular embassy had to pull their children out of school and college. Appeal letters to the Minister and Foreign Secretary went unanswered. This has been going on for at least two years.

"We have already spent an enormous amount of time and resources preparing for APEC. Our foreign missions are in place for various
reasons, but specifically in relation to APEC, they will play a significant roll in getting world leaders and their staff here for the event. What is the point of spending so heavily on infrastructure for the event if we cannot afford to keep the doors of our front line PNG representatives open?

"We have raised the issue of our foreign missions before, and clearly there continues to be a lack of priority placed on the work of the public servants that we send abroad to represent our interest.
"We call on the Prime Minister, Peter O'Neill and his Chief Secretary to provide an immediate update to the nation on the financial status of our missions world wide. Papua New Guinean taxpayers must be given an explanation for your Governments failure to act, bringing shame on us all.

"The world is watching, especially the U.S. State Department Senate Committee, that occupies the same building in Washington DC as our Embassy. They will have front row seats when Marshall's come to remove Embassy staff and escort them out.
"We have sent some of the nations most respected former public servants and career diplomats to represent us globally.

"Our High Commissioner in London, Her Excellency, Winnie Kiap is also the Chair of the Board of Governors of the Commonwealth Secretariat. Support for her nomination and election last year came from commonwealth nation heads of mission in London and Brussels from Pacific Island nations and African and Caribbean nations, which is a clear indication that our missions are working hard to create avenues for PNG to gain further exposure in the global arena.

"Which mission will be next to close its doors thanks to the inefficient leadership of Chief Secretary Isaac Lupari? Perhaps if Lupari spent less time focused on the workings of the PNG Electoral Commission and more time managing the public service, further national humiliation could be averted.
"The Prime Minister and Chief Secretary must immediately disclose to the nation the true financial situation of all our diplomats and their respective posts," said Mr Kua.
APEC British High Commission corruption dc Failure Kerenga Kua Peter O'Neill USA washington dc