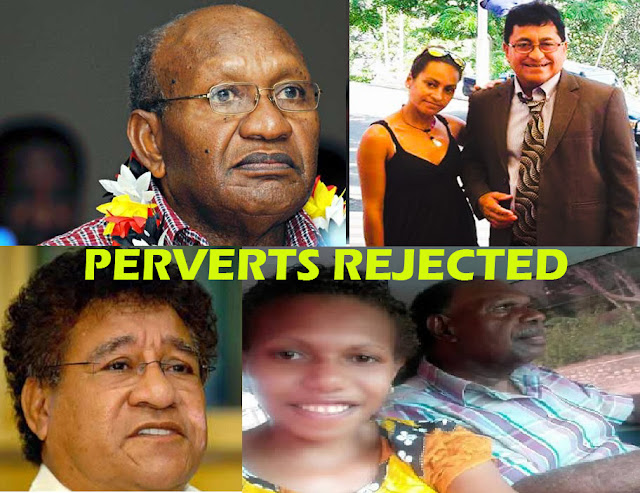 The people have spoken No sexual predators in the next Parliament. The list of MPs exposed by PNGBLOGS have all fallen victims to the people's verdict at the polling boot. The list is made up of high calibre MPs and senior Ministers, even including the Deputy Prime Minister, Now that they will no longer have the protection of being in government and roam around as Statesman, Police and TASK Force sweep after the formation of the new government must move in very quickly and restart investigations into these former MPs. A majority are from the Ruling PNC party who are sexual perverts engaged in sex mostly with their own relatives, they are Attorney General and Prime Minister hand Ano Pala, CIS Minister Jim Simintab (Wewak MP) Deputy Prime Minister Sir Leo Dion and Samarai Murua MP lifetime backbencher, Gordon Wesley.

Ano Pala MP who took over his son's wife, chasing out the son and taking over his wife marrying her and becoming the father to his own grand-kid and now fostering a healthy relationship with his son's wife.

Deputy PM and a rock to Peter O'Neill Grand Chief Sir Leon Dion or Grand Incest Chief,
Dion has been persistently committing sexual crime having forced intercourse with his two nieces for six (6) consecutive years between 2010 and September 2016 with his two nieces who are orphan daughters of his blood sister. He would call them into his room to make him cups of tea and massage him and then he would induce them and sexually abuse them. Sometimes he would take the older sister in his vehicle and commit the crime in the vehicle, away from his residence. This started when the nieces were at age 22 and 17. The two sisters became orphans after both their parents passed on and have found a home and protection under the care and trust of Dion. Thank God the people of East New Britain rejected a sick man.

The people of Samarai Murua also rejected a sick man and did the right thing by electing Mr.Isi Leonard.Mr Wesley had sexual relations with his own two daughters. He exerted his physical authority over the two girls when they were much younger and the two grew up with his constant abuse.