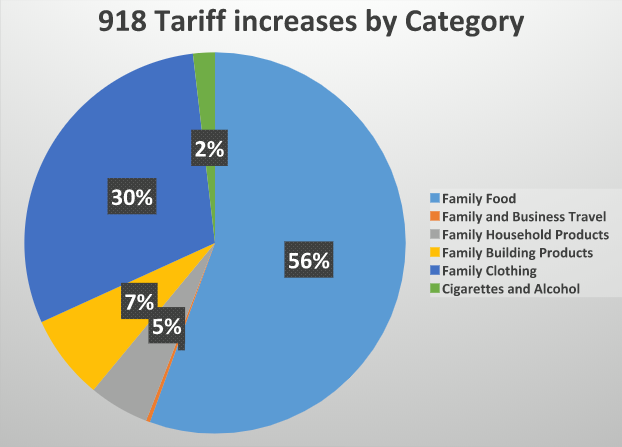 by IAN LING-STUCKEY MP
# The biggest negative impact will be on family food budgets. There have been a massive set of price increases facing families – 518 areas where family food budgets will face increases.
PNG Families to suffer from government’s tariff increases
“PNG families will be facing much higher prices in 2018 because of poor government policies. Since forming government in 2017, the National Government has organised to increase prices on 918 items. These price increases will start coming through early in the new year. A government more in touch with the high cost of living facing our people would not deliberately increase prices that mainly suited their business besties” said the Shadow Minister for Treasury and Finance, Ian Ling-Stuckey.
“The biggest negative impact will be on family food budgets. There have been a massive set of price increases facing families – 518 areas where family food budgets will face increases. The major ones are the 25% increase in milk products, the huge jump in chicken prices of K1.70 per kilo (and this the wholesale price, so the retail price may increase by even more),15% increases in a range of fish products and juice concentrates, and the 60 toea per dozen increase in egg prices. 56% of the tariff increases focus on the struggling food budgets of PNG families. PNG families deserve to be able to feed their children without these massive and widespread price increases” said the Shadow Treasurer.
“There will also be major increases in the costs facing families and businesses in their costs of travel. The increase in diesel excise by 13 toea per litre – and the government plans to increase it by a further 38 toea per litre in future budgets. On top of this is an increase in all imported petrol and diesel of 10 toea per litre. Experience indicates this will eventually be passed onto motorists as the reduced competition almost always leads to price increases.
“There are major increases in 47 types of family household products such as 15% increase in the costs of laundry detergents, plastic kitchenware, buckets and tableware, as well as 10% increases ranging from toilet paper to shampoos and tissues and tablecloths and detergents.
“But there are even more price increases that have been hidden into the 2018 budget. Some of these increases are not obvious from the 32 pages of tables provided by the government with their missing descriptions and errors. The government did not make clear that there were plans for decreases in over 640 products on 1 January from the earlier Tariff Reduction Program. These have not been put on hold – which means families are now paying more than they would have been without this change in policy” said Mr Ling-Stuckey.
In particular, this means that there are many clothing products that would not be cheap as they otherwise would have been. But on top of what would have been a 5 per cent price decline, the government has added another 5 percent on clothing such as shirts, shorts, blouses, dresses, socks, T-shirts and tracksuits.
“The government also doesn’t understand how expensive it is to build a new house in PNG, or renovate one and there are major increases in the costs of building products. Some of these particularly concern me. For example, PNG has the poorest levels of access to safe water in the East Asia region according to the World Bank. So why does the government increase the wholesale price on imported plastic water tanks by 15%? Families on many of our island communities in kavieng & namatanai and in all other maritime provinces do not have year-round access to enough clean water.During the dry season from april to October, which is over half the year, we fetch water from holes dug into the beach shoreline many of which are not accessible during daily high tides and we regularly bath in salt water! This is how we still live today. Access to affordable short term solutions like plastic water tanks will be taken away with the 15% tariff increase. Why are my maritime people punished like this? ” asked Mr Ling-Stuckey.
“These increases in price are the wrong way to start the New Year. The Alternative Government understands that there is a need to raise more revenue to deal with PNG’s fiscal crisis, but the government is going about this in the wrong way. Their approach is hurting families. It is inefficient, inequitable and administratively clumsy.
In future days, I will talk more about the hidden inequities in these price hikes and how out of touch the government has become” said the Shadow Treasurer, Mr Ling-Stuckey.
Hon.Ian Ling-Stuckey,CMG.MP
Shadow Minister for Treasury & Finance