Schram wants to continue to make a positive impact in PNG 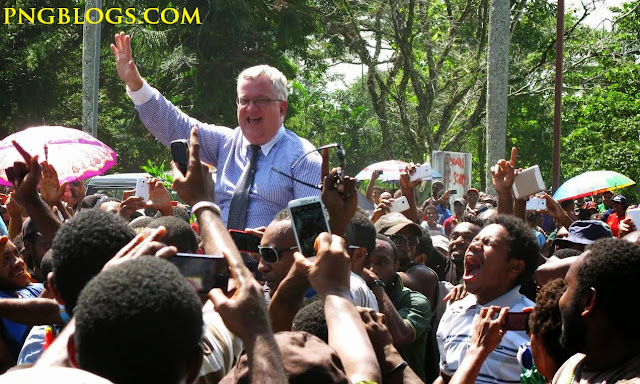 On 15 February, the Council of the Papua New Guinea University of Technology (PNGUoT) decided to terminate my services, and gave me and my wife 7 days to ship out, and leave our residence on campus, where we have lived more than 6 years.

On 19 January I was given a mere 7 days to answer the allegations, and I managed to hand in my answers though incomplete before the deadline. I returned on campus from an engagement elsewhere with my wife on 23 January, and that same day the Acting Vice Chancellor Dr. Ora Renagi wrote
that I should “stay away from the office. I was also denied an extension to prepare myself, and neither was I given access to important files in the Registry and Bursary regarding this case.

Council itself, however, acknowledged that the main ground for dismissal was that allegedly I did not present a certified copy of my original doctoral degree from the European University Institute. Here is a link to my thesis on the Institute’s website http://cadmus.eui.eu//handle/1814/5972. This had been a
condition for my contract renewal in 2015. In an email dated 13 January 2015, I requested the renowned European University Institute, established by an international treaty, to send me two hard copies, one to my office in Lae and one to Cairns. Upon receiving the document in Lae, I handed it over to the Registrar. The other original I kept. Why would I do otherwise and self-sabotage
myself? And, why was this matter not brought up by the Registrar when later on 26 August 2016 I submitted myself to the Annual Performance Assessment, which lasted one whole day and was supported by an independent consultant?

I was interrogated by Council on 15 February, but without being told previously whether I was just to receive the decision of the council, had to answer questions or was allowed to give a presentation. I did not know what was going to happen. At no stage in this process, which started in October 2017, did the Acting Chancellor Jean Kekedo ensure I was involved in or consulted over Council proceedings? An investigation was launched, without a Council resolution and without my involvement. As a result, only convenient information was included in the report. Sam Koim reputedly is specialised in
fighting corruption, but he has no experience with the operation of a large organization or the running of a University. This is a clear breach of due process.

When crucial physical evidence (certified copy of my doctoral degree from 2015) was presented to Council before it took its decision, and it became clear during the interrogation that crucial evidence may have been hidden by the Registrar, Council failed to correct its course, and proceeded galloping towards the abyss like a band of blind horses.

The whole Council has been misled by the Registrar, who failed to provide this crucial evidence. They decided on the facts and evidence before them, but the crucial evidence was missing. The accusation that I did not do, what Council told me to do and that I did not comply is therefore false. The whole process was biased and I never received a fair hearing. The fact that Council decided unanimously is not a sign of strength, but rather a sign that due process was not followed. Before 2012, the former PNGUoT Council always decided unanimously, because it was a rubberstamp machine for the former Chancellor. In this case, the Council has not presented the crucial evidence and was not given ample time to digest the facts and ask critical questions to the lawyers who had been instructed to put the case together.

There are some very bright minds on the Council today, but they were not able to see through the web of lies and deceit. As to the other allegations, the fact is that there was no mismanagement at the
PNGUoT. Even Sam Koim could not find corruption. It suffice to know that my travel budget had been approved by Council. Therefore, I asked Emmanuel Issac of Emanuel Lawyers in Port Moresby to
prepare my case for review by the courts. As a Head of a State Agency, I have many obligations, but I have also right to be protected from unfair and biased attacks. I was not given a fair hearing and never enjoyed the beneft of the presumption of innocence. After 6 years it is impossible for me and my wife to vacate our residence and leave the country in 7 days. I have become rooted in the business community in Lae. Through my brothers in my adopted village Busama, I have come to love this country and its warm, welcoming, and peace- loving people.

My wife too has contributed much to the community over the past years working for organizations like Buk Bilong Pikinini and FemiliPNG against domestic violence. This year, as a volunteer she was not starting to work for the cervical cancer screening program. Both of us did not come to this
beautiful country to enrich ourselves, but to make a diference. In the media there have been statements from Council members with all kind of technicalities and impressively looking legal arguments. My achievements over the past 6 years, the result of all my hard work, however, seem not to have been taken into account. I have much to say about all this, because I have done nothing wrong, and never lied. The matter is now before the courts, and it is ftting therefore out of respect not to make anymore statements about the case, so as to allow the judges to make up their minds independently.
ALBERT SCHRAM UNITECH