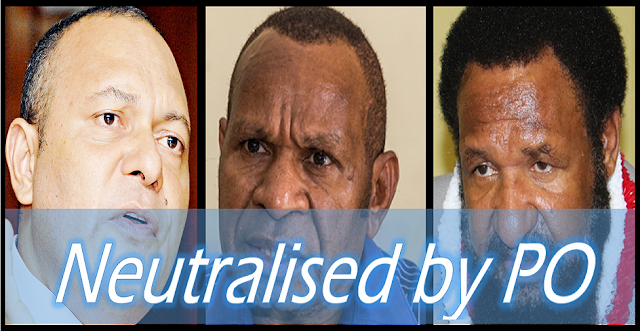 Peter O'Neill has successfully silenced and neutralised three of his biggest and most vocal critics who were in the opposition benches in the previous term of Parliament.

With a highly corrupt and heavily manipulated election process, Don Polye stood no chance as O'Neill targeted his Kandep Electorate with very heavy police and military presence during election 2017. The result is that Don Polye was ousted under a questionable election process, the outcome of which is yet to be decided by the courts to this very day.

The court process to hand down a decision on the Kandep seat is being unnecessarily delayed and this indicates that the judiciary may not be operating freely from political control and interference. Kandep was one of the seats that experienced violence during the election and how they managed to conclude the election process and declare a winner remains a mystery.

Basil took the deal and made his move to join O'Neill in government but Namah being the warrior he is, refused the deal outright. He refused to submit to O'Neill's fear and intimidation tactics. What O'Neill offered was a chance to join him in government and if that offer is accepted, there was no doubt some form of reward for the MP.

When the offer was refused, as in the case of Namah, O'Neill then used every trick in the book and pulled every string available to him to go after the MP concerned. Belden Namah is still fighting his tribunal recommended dismissal from office in court.

In an interesting twist, we now see in the news that a vital piece of evidence in the Namah court case, the tribunal transcript has gone missing from his court files. There is little doubt in my opinion that forces are at play to ensure Namah is removed from Parliament and eliminated as a threat against O'Neill.

Patrick Pruaitch has been unusually quiet as an opposition leader and the reason is quite simple. Pruaitch has his own long outstanding leadership tribunal that is being conveniently "forgotten" for now. Once Pruaitch starts being aggressive and starts making noise, you can bet your last kina that his tribunal hearing will be brought up and Pruaitch will be fighting for his own survival in Parliament.
Gulf Governor Chris Haiveta has interestingly made the Prime Minister's list of the traveling party to China. Haiveta was recently referred to his own long outstanding leadership tribunal perhaps because he may have stepped out of line. Now that he has been towed back into line, his small reward is to be on the PMs globetrotting and sightseeing tour list.

While on this trip, has anyone bothered to ask why these 4 backbench MPs are included on this trip? What is the purpose and role they play in this trip of high powered delegations? Look beneath the surface to the politics at play and cunning brilliant mind of Peter O'Neill and the reasons will become clear.
The 4 backbench MPs on this sightseeing trip are:
1. Sohe MP Henry Amuli
2. Lagaip Porgera MP Tomait Kapali
3. Jimi MP Wake Goi and
4. Okapa MP Saki Soloma
Don't forget, politics is a numbers game. If you have the opportunity of using public funds to wine and dine an MP to support you remain in power, by all means do it! That's how Peter O'Neill rolls. As long as it's being funded by taxpayers and not burning a hole in his pocket, why not?
Belden Namah Don Polye Peter O'Neill SAM BASIL