ONUS IS WITH THE GOVERNMENT AND THE JUDICIARY SYSTEM OF PNG 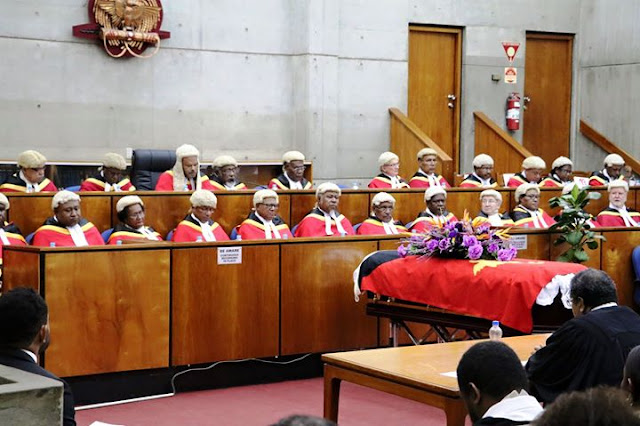 Government is one that can be blamed for this burning of one of the aeroplanes of Air Nuigni. Government must not hide and put blame on those culprits who have burned down the plane in Mendi town, Southern Highlands Province.

The involvement of Government for playing technical means on the appointment of Southern Highlands Regional Seat has caused this incident. Government has no right to intervene politically to handpick a leader or favouring a leader to be SH Governor. It is the Government that politically involved at first sight by picking William Powi has the Governor of SHP without completing uncounted boxes. The Government through Electoral Commission prematurely appointed William Powi based on ghost votes. The real votes supposed to be counted were not counted, why did they leave other boxes out? Why did the Government or Electoral Commissioner (Paul Tomato) to appoint William P without considering remaining ballot boxes?

Those questions are necessary and very useful to be answered by this Government. The rationale behind this burning of Airplane is known only by the Government. Not any tom, dick and harry. The failure of Government has caused this incident or even the deaths of few people plus properties worth millions of kinas had been destroyed last year, are the results of this Government’s nepotism and biased action.

Government must not hide, come out and tell the truth before things get from bad to worse. People need a leader like a sheep needs a shepherd for directions. They will not give up until they have a leader. Government, therefore, must impartially find necessary solutions for SH people to have a leader.

Furthermore, Judicial System in Papua New Guinea seems to be compromised with the Government. Many actions or omissions recently performed by Justices and Magistrates who are supposed to maintain ‘rule of law’ have instead, crippling the ‘rule of law’. We find uncooked decisions in the court, when we seek for justice; we find biased decisions, when we think justice will be served; we see laws are against us only and in favour of those in powers. All these happening because of our Judicial System is compromised.

As clearly provided by our Constitution or ‘mama law’ that Judicial arm of the country is allowed to operate independently to dispense justice for this nation. Peoples’ trust is bestowed upon the judicial system, in times of problems, they find hope. And this institution is the corner stone and the central nerve system of this nation to provide just and fair decisions. In all material times, it must maintain its integrity, reputation, status and most of all, it must be an independent body operating impartially to announce fairness.

However, the Judicial System now has turned otherwise. The controversy between William Powi and Joe Kopol supposedly be ended long time ago. The verdict should be disposed long time and Southern Highlands by now should have a leader. Because of our judicial system’s failure to fast track such important case and provide verdict, we confirmed the clear result of plane being burnt down at Mendi.

So it must be said and understood by this Nation that, the onus is with the Government and the Judicial System. Not people of SHP nor Air Nuigini Company. People need a leader. When there is no leader, the destiny is unknown hence we see such heist sparking this nation.