by MARK TUPAI
A little boy who happens to have gotten lucky by spivying Leo Hannet of the airport land to build his property estate is now the Chancellor of PNG's premier University.

Kennedy was appointed by the Minister for Higher Education as Chancellor of UPNG. Don't we have other statesman with credibility to be better candidates for this job? This is suppose to be PNG's Premier University. The appointment of Jeff Kennedy is a joke. Aside from that. It's a conflict of interest case. Apparently the Minister is still a director of Jema lawyers. Jema lawyers is owned by Jeff Kennedy MacRonad Nalle.

The appointment of Jeffery Kennedy is therefore very fishy and at best a setup by the Minister to squander all University funds and resources, take over all project works and more so to steal all unused University land to extend their real estate business. Obviously its a shakeup for the worst, as reported on paper today, instead of good because this appointment has all the hallmarks of corruption than good.

Jeffrey Kennedy, the newly appointed chancellor is a long time brother and business partner to Ninigis son Mac Ronald  Nalle of Jemma Lawyers . MacRonald is the current advisor to Ninigi and MacRonald and Jeff go way back . They jointly own Kennedy estate at 7mile  and Lealea road and  Kenney is salient partner to the Firm  MacRonald lawyers  Kennedy does not have experience at that level but this is cronyism ..Kennedy is a property developer this is all about the land in UPNG that  they are after.. The precedence has been set by previous UPNG administration by leasing its land at Rainbow to Puma Energy. Pila wants Kennedy to us his position so can  they can  benefit from similar arrange that would involve their own companies 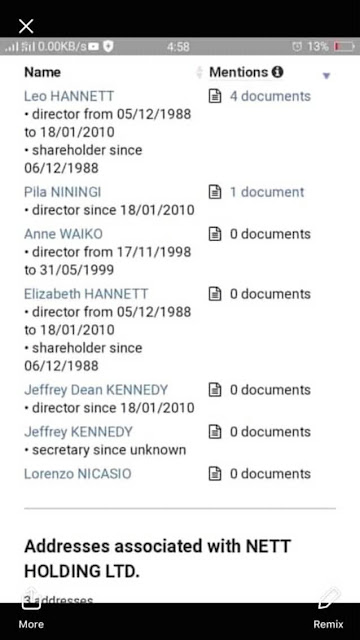 By: Lori Otto Treasurer, Ian Ling-Stuckey has been harassing Government bureaucrats in PNG Department of Foreign Affairs and International Trade (DFAIT) demanding diplomatic immunity from any prosecution within Papua New Guinea for any failed advises offered by his failed former Australian Treasury Official, Paul Flanagan. Paul Flanagan was personally employed by Treasurer Ian Ling-Stuckey to provide advises on reducing Papua New Guinea’s debt which the Marape Government claimed was excessive. A claim that activists took to demonized O’Neill for increasing the Fiscal Responsibility Act (FRA) from 30% to 35% in 2017. Kessy Sawang wrote more details in her website. https://pngwoman.com/debt-addiction Flanagan’s role was to decrease existing Debt and work on reducing the Debt-to-GDP from 35% to lower that 30%. Flanagan did the exact opposite, he advises Marape Government to immediately amended the FRA and increase the Debt to GDP Ratio from the highly criticized 35% to 45%. According to
Read more