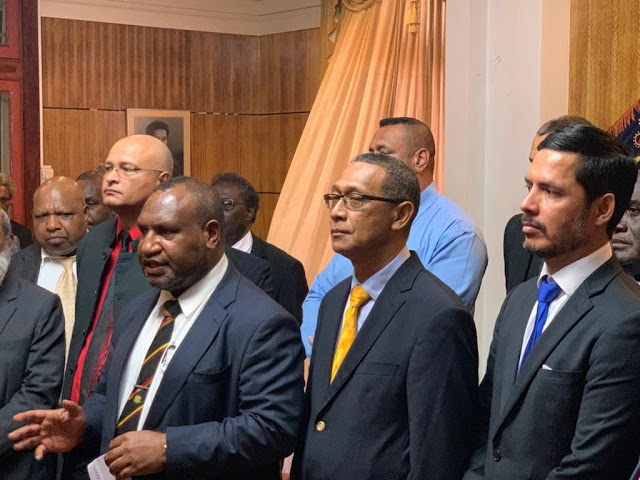 The announcement by the newly appointed Treasurer of a Supplementary Budget in September is welcomed by us the landowners from the first PNG LNG Gas Project.

In doing so, we ask the Treasurer and the Prime Minister and Minister for Petroleum to put their heads together to include payment of some of the outstanding landowner benefits which have remained unpaid for a long time since the initial commitments were made in 2009.

We understand the Minister for Petroleum may have been reliably briefed of these outstanding benefits and the perceived repercussions if not addressed immediately, a case the learned Prime Minister who also being from the area would be fully aware of. The outstanding benefits include Business Development Grants, Infrastructure Development Grants, UBSA/LBBSA Commitments, Ministerial Commitments, MOA Commitments and High Impact Project Commitments amounting to well over K3 billion.

Please note that had the previous Government been responsive to its citizens in such areas of national interest, these outstanding benefits would have been reduced by half or even two thirds. Instead, the O'Neill Government opted to divert all its attention to concentrating the National Budget on specific areas where they could make huge profits in kick-back commissions that these important Government Commitments have remain unsettled for almost over ten (10) years that it will become a real burden to the new James Marape Government.

While we are aware much effort is currently being put into by the Minister for Petroleum to get the best out from the Second LNG Gas Project, we the landowners from the first LNG Gas Project make this appeal to the Government amidst the announcement of a Supplementary Budget in September by the three (3) days old new Treasurer to include a certain category of the outstanding benefits to be captured in this Supplementary Budget so that our anxieties are put to rest.

While most of the outstanding benefits can be appropriately captured in future Budgets starting from next year, the most pressing ones which we would prefer being captured in the September's Supplementary Budget are the outstanding LBBSA Commitments which at present stands at K152 million or more, and a portion of the Infrastructure Development Grants which in total should be around K800 million.

Mr Treasurer, it is with much pain that we appeal to the Government through Office to accommodate the aforementioned category of outstanding benefits in your September's Supplementary Budget so that we as equal partners of the historic PNG LNG Gas Project as landowners are equitably rewarded for our unconditional offer of our land for this important project to be implemented on PNG soil.