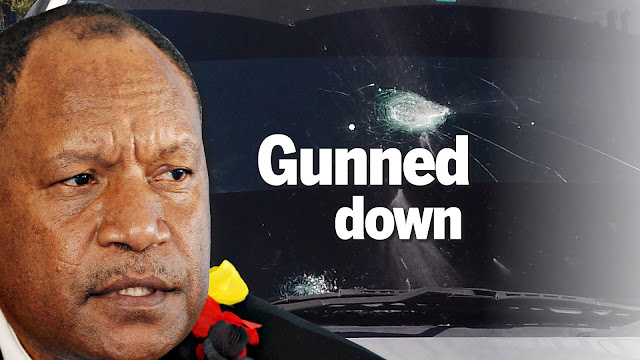 Border Development Authority was allocated a funding of K2.2 billion for 10 years but within a space of 4 years, all funding has been exhausted and there and nothing to show. Two years ago, its former CEO Fred Konga was executed in what was seen as mysterious circumstances.
Was it to hide the disappearance of the K2.2 billion? Maybe the Public Accounts Committee can bring this up again..


The Border Development Authority (BDA) Act was passed by the National Parliament in 2008. It was created by the Somare government to coordinate development activities in all border provinces and primarily focused on Sandaun, Western, Manus, New Ireland, Milne Bay and the autonomous region of Bougainville (AROB).

Treasury Minister Patrick Pruaitch announced in October 2009 that there is K2.2 billion funding for the development of six border provinces over a 10-year period. Sandaun, Western, Manus, New Ireland, Milne Bay and the AROB were to benefit from that budgetary support, which was factored into the authority’s corporate plan 2009-2012 and 10-year development plan (Nicholas, The National, 2009).

However in July 2010 former minister and Vanimo-Green MP Belden Namah alleged in the National Parliament that the BDA purchased six vessels at inflated prices, paying K2 million for each boat when the actual price was K600,000 (Nicholas, The National, 2010). Other allegations include a company contracted to set up a satellite communication facility lacking the technical capacity and a contractor’s failure to implement a K15 million town plan for Aitape.

It is not known if the authority accessed and used portions of the K2.2 billion funding for the six provinces in the last seven years. Again, just like the K55 million funding allocated to the NID project in 2014, there appears to be no publicly-available documents showing how the funding was used and if it was used for its intended purposes.

In June 2018, Minister for National Planning and Monitoring Richard Maru, when visiting the Wutung Border Post complex with other government delegates, labelled it as unacceptable and suggested that Minister for Inter-Government Relations Kevin Isifu should take control of it (Loop PNG, 2018). The Wutung complex has been lying idle since it was built in 2014 under the K90 million Wutung Trade and Investment Program managed by the BDA, and has a few defects and needs installation of necessary utilities like water and power (Loop PNG, 2018). The delegation was informed of the outstanding commitments under the social commitment of the K90 million which include rural electrification, sanitation and water supply (Loop PNG, 2018).

Since the inception of the commitment to build the casino hotel, there have been changes in the powers that be – within the CMSS as well as the government that has drastically affected the progress of the casino hotel. However, the major concern here is not that of the morality, nor the other concerns or scrutinies surrounding the construction of the casino-hotel, but rather the injustice that surrounded the construction of the casino-hotel, a plight in which implicated the two landowner incorporated land groups – Petroleum Resources Gobe Ltd and Petroleum Resources Moran Ltd. These two ILG’s investment of K22 million translated into a loss when the completion of the project was not realised upon lack of funding by CMSS.

Johnson Takip said…
It seems there are more balls in one court......ongoing