POLITICAL PARTY PROSTITUTES - PNG HAS MANY 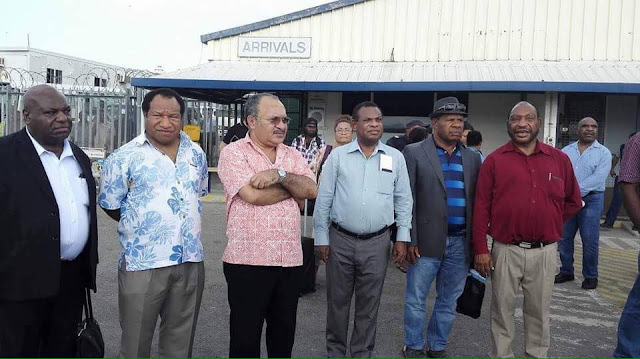 Almost more than two-thirds of parliament is occupied with "political party prostitution politicians". Those politicians have similar character resembles a prostitute. Politics and Prostitution are only jobs where inexperience is considered as a virtue. People jumping from one party to another or switching political ideologies like diapers. They will hardly sell their real policies, development plans, manifesto or discuss any bread and butter issues in a more mature way.

In Papua New Guinea politics, those political party prostitution politicians raid on people's ignorance. We have a very few elites at the top, very limited numbers of the middle class and majority poor, ignorant and naive citizens.
They have ensured to maintain the status quo so that it's easy to manipulate the masses. Due to this reality, our Politics are not Policy-driven and oriented rather promised oriented and driven.

Most of their campaign messages are based on a verbal promise; if i/we are elected, I/we will build a bridge, a school, provide free wifi, reduce load shedding, paint your houses, build your Kitchens, pay your school fees etc. These kind of promises are appealing to the grassroots of our people.
Here in PNG; just compose a great hit song, great dance moves, buy beer, food, distribute campaign attires then add insults, violence, and street language...YOU HAVE THE ELECTION!

When they got into parliament ultimately, they are not fighting to END corruption, they are fighting their way INSIDE the corrupt corridors. They do not want to change the system, they want to also benefit from it. They end up speaking out against corruption only when they or their favourites are not benefiting from it. They will continue with this kind of attitude and we will continue to lose the fight against corruption.

Then after benefiting from corruption, they become more focussed on issues such as giving out handouts in church donations, succession and electoral politics, issues that are of less significance to the nation at this time. To them, leadership is about renovating classrooms, repainting buildings, giving money, premature visitations and attending ceremonies. That is what happens when we lose our value system and principles.

The politicians shift right or left to suit the money, continue politicking and miraculously expecting any meaningful and sustainable progress. They are ever putting this country on a campaign mood and rarely deliver on their promises.

In developed countries, leaders wake up each day knowing that they were elected primarily for one purpose: Deep thinking. Their responsibility is to do some critical, creative, empowering and visionary thinking and then translate their thoughts into plans and actions that transform people lives’. But here in Papua New Guinea, it is a different scenario, the political prostitutes continue to wack and wiped each other butts on social and mainstream media.

We Papua New Guineans must GROW UP! We must shift our mindset from such Politics to those that are Policy built, driven and inspired. Our focus must on prominent politicians who can design and implement measurable, concrete and sound economic policies that have deadlines.

These Policies must entail how it will improve efficiency and effectiveness in its service delivery, cut costs, remove middlemen and corruption. It must be based on thorough research with empirical data hence allowing experts to question the politicians.

Most of our citizens believe that the functions of the MP is to support funeral needs, officiate on weddings, commissioning of projects, inspecting projects and civil servants furthermore conduct donations. Therefore, we don't pay attention to what our representatives are doing in parliament, council chambers and cabinet.

There must be civilization take place in our public and political sphere. Unfortunately, truth is that unless there is civilization in our politics otherwise, we will always have politicians with resembles characteristics of "political party prostitutes" running this nation, thereby No sustainable and progressive economic development will be seen.

Given the level of political party prostitution going on currently, I propose that all national funds be directed to buying more free sanitary pads for our MPs.