"TAKE BACK PNG" FROM WHO? O'NEILL HOLDOVERS GIVING THE MIDDLE FINGER TO MARAPE 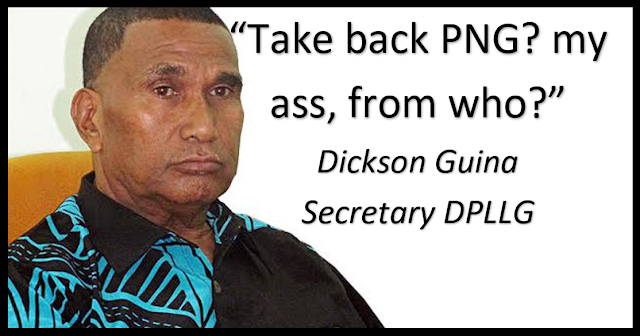 The three very seniors officers are career officers of the Department of Provincial And Local Level Government who professionals and dedicated public servants are sacked by Guina to protect and suppress exposure of widespread corruption & stealing by Dickson "Dick" Guina himself.

The three officers are responsible for the investigation and reports which lead to the arrest of:

1.  His niece who stole 142'000.00.arrested by National Fraud and Anti-Corruption Squad

2.  The pending National Fraud and Anti-Corruption Squad investigation on the stealing of the local level government super fund of 7 million Kina.